The Guardian Angel’s Chapel in Winchester Cathedral was painted in 1241.

King Henry III, also known as Henry of Winchester was baptised in the cathedral in 1207. He was the son of King John and assumed the throne at just nine years of age. He was fortunate in having three great men standing beside him, Hubert de Burgh, Peter des Roches and the honourable knight, William Marshall. Still, in the aftermath of what effectively was civil war, it was a time of tremendous upheaval in England.

What a fascinating king Henry was though. He married Eleanor of Provence and had five children with her, he was pious and chose to rule more as an autocrat. He travelled far less than his predecessors and planted himself quite firmly in Winchester where he struck up a complex relationship with the Jews in the city. He removed vast sums of money from Jews all over England but was keen to offer some sort of deal with leading Jewish merchants in the city of Winchester.

King Henry III had a great fondness for Winchester, in fact he was known as Henry of Winchester and in 1241, sent for his painter, Master William, to paint the ceiling of the Guardian Angel’s chapel. The whole premise of paying for such a painting was inseparable from the idea of intercession, that is for the King or others to intercede between God and the people, using his authority to forgive/offer prayer. We know King Henry III was a pious king and so such an act would have been totally in keeping. Some patrons, to show that they were responsible for such a gesture, would have their signature painted onto the work in some sort of heraldic shield, probably not necessary when you are the King of England.

The work would have been carried out by a team of painters with William the King’s painter directing operations and undertaking the detailed work. It was probably undertaken in the Summer months when the light was better and the days were longer. 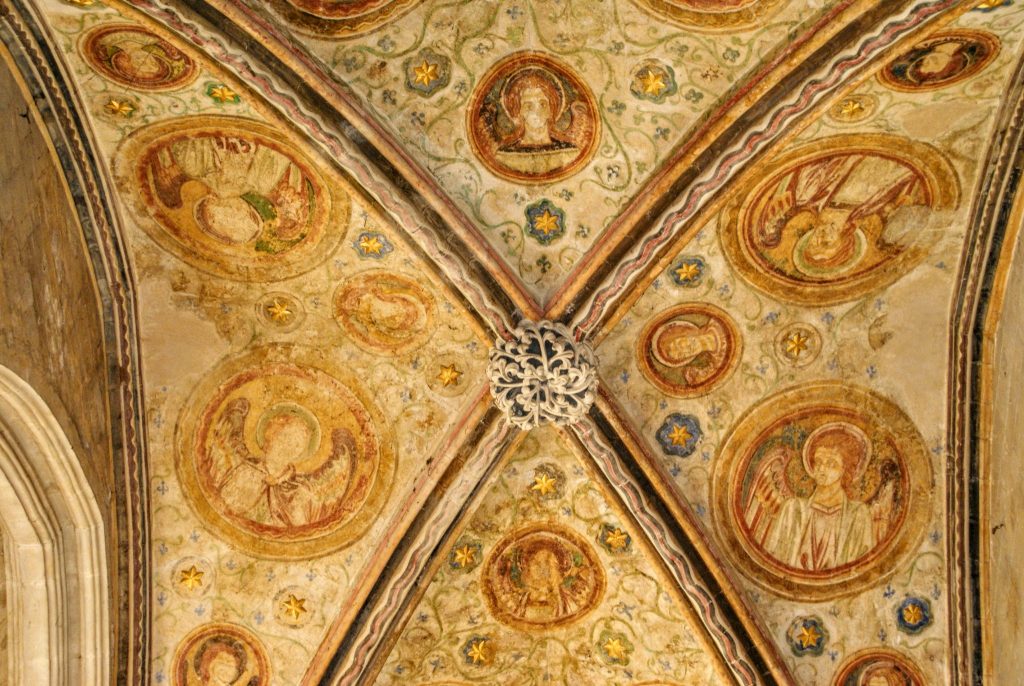 How was such painting carried out?

The vault of the Guardian Angels’ Chapel is high up and so a wooden scaffold would have been erected. The surface would then have been prepared with a ground, that is a smooth plaster made from lime, sand and water which would have been applied and allowed to dry.

The paint colours would have been selected from a number of pigments, some of them from cheap sources such as clays but the vault of the Guardian Angels’ Chapel would have used more expensive pigments derived from minerals imported from afar such as azurite and malachite or plants such as indigo.

The paints would have been mixed on a palate, a wooden board or oyster shells were sometimes used. The pigments were either mixed with lime water or some sort of a binding agent maybe from egg whites or the use of linseed. Such paintings may have been fixed with a glaze thus making the colours stand out even more brilliantly.

The painting consists of twelve small angels and eight larger ones peering down through roundels, looking like port hole windows. It is thought the original background was a night sky covered with stars and so it would have looked as if the angels were peering down on us. The background of twining foliage was added later. It avoided being white washed and has been restored twice, once in the early C19th and then in the mid C20th. 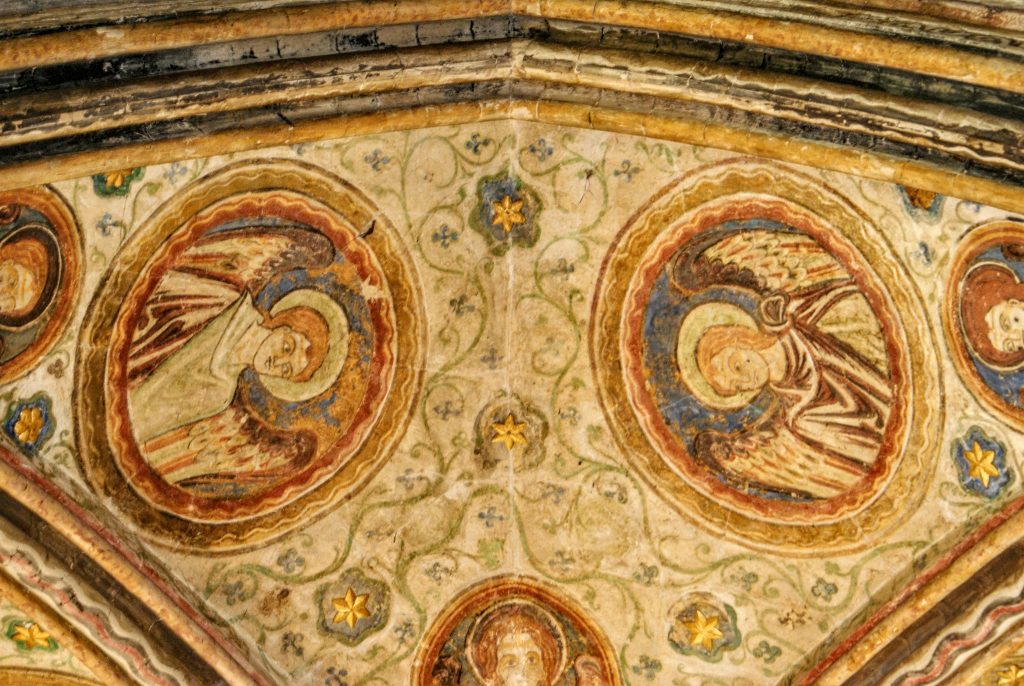