Danebury Hillfort is just one of many hillforts occupying the landscape across Hampshire and its neighbouring counties.

Where we live, tucked down in the river valleys, we gaze up at highlands that are bare. Only the flocks of sheep and grazing herds that maintain the short grasslands occupy the space. Many of these chalk ridges were once occupied and hillforts constructed. One of the most researched of these hillforts is Danebury Hill. It is a lovely place to visit with a carpark at the end of the eastern gateway. The ditches and banks are still very impressive and the views from the top, across Hampshire and the neighbouring counties are really lovely. 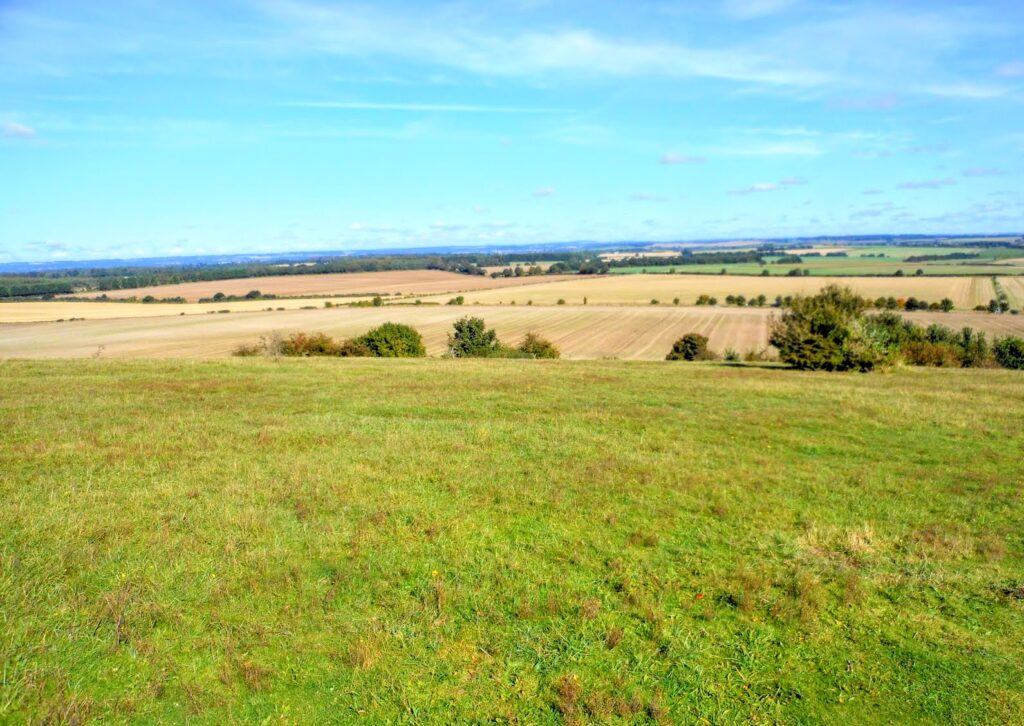 From the top of the hillfort you can see for miles across the countryside.

Where is Danebury Hillfort?

Danebury Hillfort lies close to the Test Valley, just west of Stockbridge and east of Nether Wallop on an upper chalk ridge that runs east to west. It is circular in form with an entrance on its eastern side and another on the south western side. The views from the top are impressive. You can see for miles. To the north are the high downs, to the west is Salisbury plain and then south and east is the Hampshire Basin. Such a position offered the best chance to see an enemy approaching.

Construction of the hillfort.

Danebury Hillfort also known as Danebury Ring is an Iron Age fort built around 500BC. It was a fortified enclosure of an area of about 5.5 hectares and when it was excavated in the 1970s and 80s a picture of life in the hillfort emerged. The site was occupied for about 500 years before it seems to have been abandoned. There was some evidence that the site had been occupied by a Bronze Age settlement before the hillfort was constructed.

The fortifications were quite significant with the two gateways being defended by timber gatehouses and earth banks. There are three ditch and bank circuits, the largest of which is some 6m deep and 12m wide. Curved narrow paths led to the entrances so that attackers would be slowed down and almost corralled at the end, leaving them with nowhere to go. The excavations showed that the gateways had been burned down on several occasions. The outer earthwork was a shallow V shaped ditch with banks on either side, runs around the contour and then continues as a linear feature for several miles, keeping to the chalk ridge. 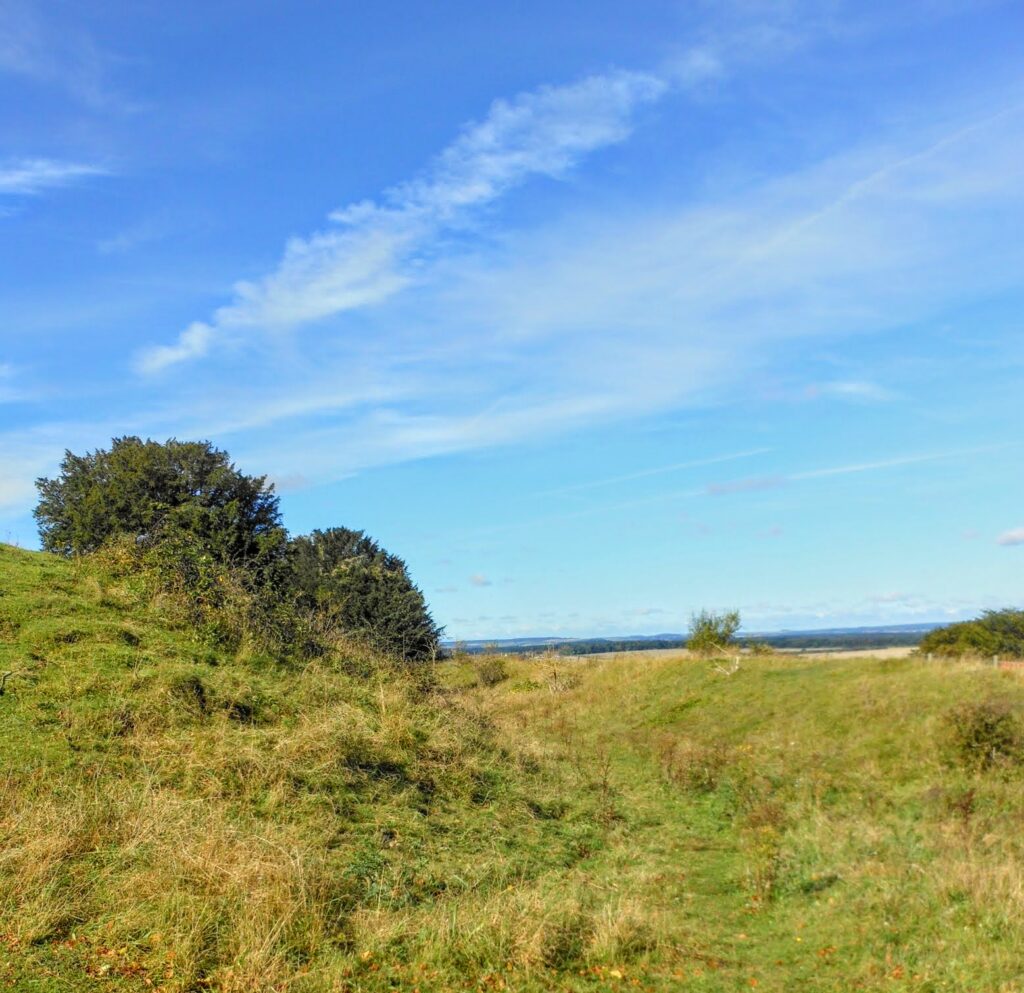 Inside the fort were roundhouses and other rectangular buildings. There were pits filled with the detritus of life, roadways and a shrine. There were places where carpenters worked, food prepared, tools forged and repaired. Evidence of spinning and weaving, burials, all of life captured inside the fort. Perhaps most interesting are the number of weapons that were found. For example thousands of sling shots were unearthed along with spears, javelins and swords. Obviously inter tribal warfare was a very real and threatening thing.

Another thing to consider, there was no water supply in the form of a spring or a well at the fort. So where and how did they get their water from?

Excavations from other sites on chalk ridges have revealed dew ponds. These dew ponds were an important source of water for such communities. 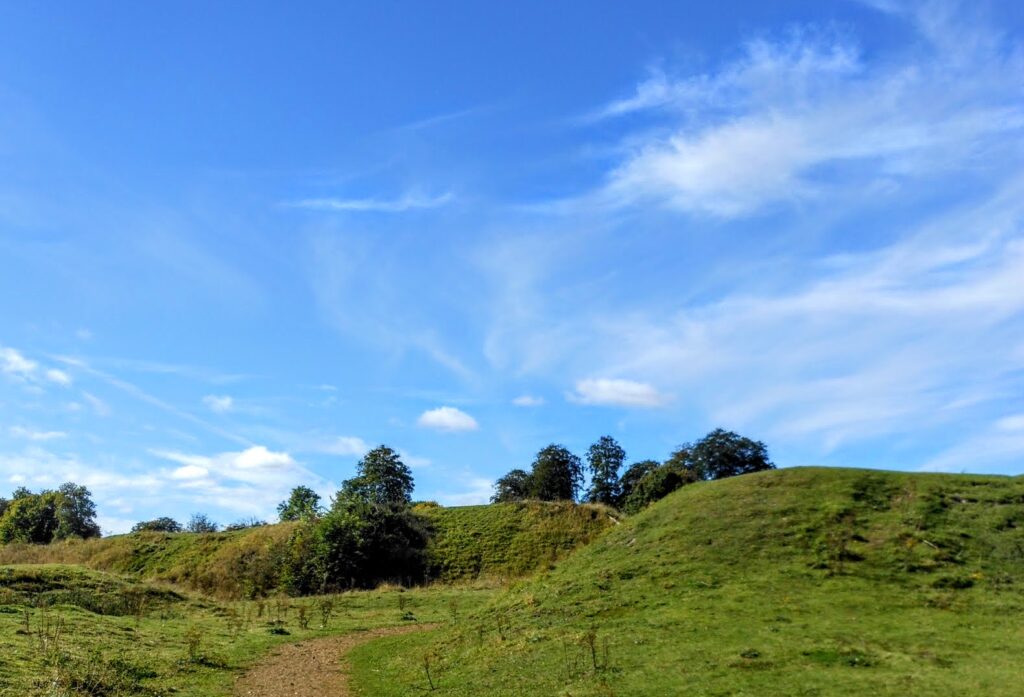 The Romans, who were more than capable of ransacking the hillfort did not seem to be overly interested in setting up camp here, only a small selection of Roman pottery was found. There was some evidence that the site might have been used in the C13th and that in the C16th a charter was drawn to allow its use as a fair ground.

Other significant hillforts in Hampshire.

These are many hillforts scattered across the county but these are some of the more significant ones that are worth a visit. 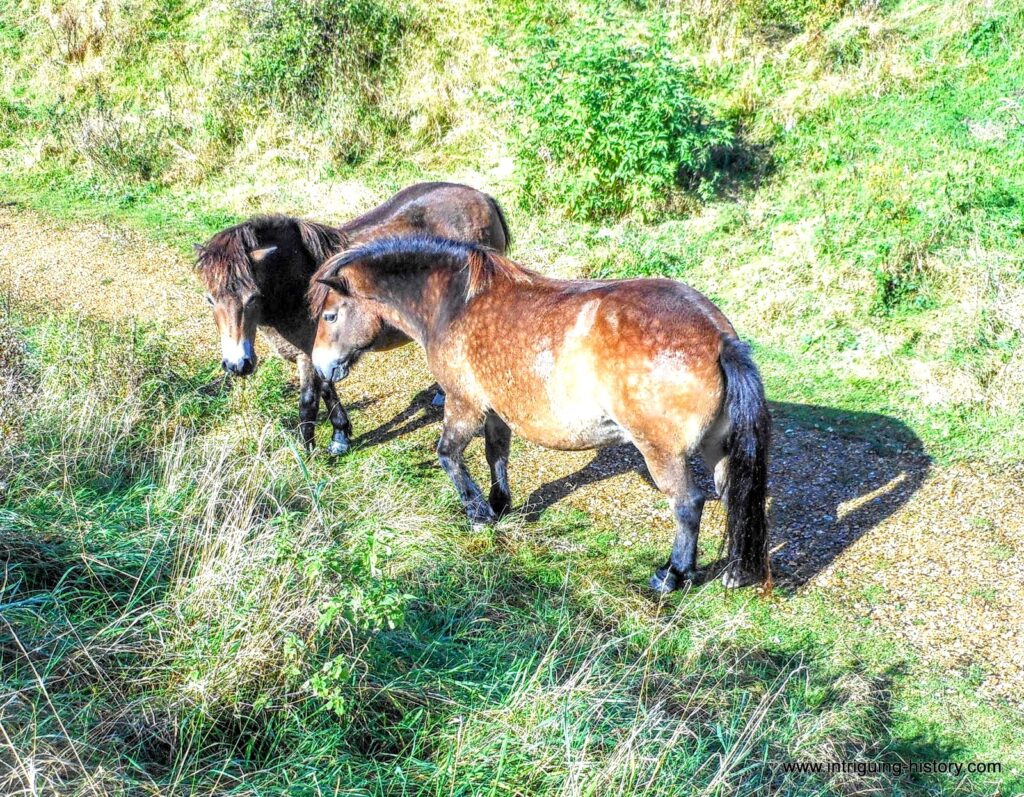