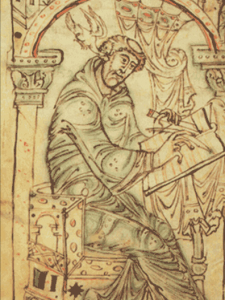 The conversion to Christianity of the early Saxon kings was fundamental to the establishment of a Christian Winchester, known as Wintanceaster. When the Romans left, the city it fell away, becoming a shadow of its former self but not wholly deserted.

The fact that the early Saxon chief Cerdic and most probably his grandson Cynric, arrived on the shores of the present day Hampshire, at the start of the C6th, was a pivotal moment in time because Cerdic would put in place a great dynastic line.

Cerdic’s great, great, grandson Cynegils converted to Christianity in AD 635 as did his son Cenwalh and it was he who brought his royal patronage and Christianity to Winchester by building a large church, the Old Minster.

This single act, placed Winchester at the very centre of Wessex and as the power of the Wessex Kings grew, at the heart of England and Western Europe.

So who was Cenwalh and what sort of a character was he to bring such a force to Winchester?

To begin with, it should be noted that little is known about this strong and important dynastic line. What we do know comes from the authors of the Anglo Saxon Chronicles, written at a distance in a rather biased way, they give a sketch, a story, maybe even a fable of the lives and times of these Saxon kings.

So what has Bede to say about him? His observations on Saxon kings seems to be fairly robust, on Cenwalh he reports;

‘he refused to embrace the mysteries of the faith, and of the heavenly kingdom; and not long after also he lost the dominion of his earthly kingdom; for he put away the sister of Penda king of the Mercians,, whom he had married, and took another wife; whereupon a war ensuing, he was by him expelled his kingdom…’

So we learn he was married to Penda’s sister and then he left her for another woman. He was then exiled and took refuge with a Christian king, King Anna of East Anglia, an interesting choice but maybe it was that Cenwealh didn’t care much about faith one way or another until, he underwent a Christian conversion and is baptized by St Felix about AD 647.

Dates then become muddled but eventually he returns to power but his Bishop, who at that time was in Dorchester – on – Thames, does not seem to have pleased him.

‘At length the king, who understood none but the language of the Saxon’s, grown weary of that bishop’s barbarous tongue, brought into the province another bishop of his own nation, whose name was Wini,  who had been ordained in France and dividing his province into two dioceses, appointed this last his episcopal see in the city of Winchester,  by the Saxons called Wintancestir.

So Cenwalh is ruling over a Kingdom that is large and important enough to have two diocese, Winchester becomes an ecclesiastical centre for the first time.

However Cenwalh still faced a considerable threat from Mercia as they continued their pressure on the Saxons. Wulfhere, son of Penda, fought his way down through the lands of Wessex as far as the Isle of Wight, capturing the Meon Valley and handing that over to the South Saxons.

It would be wrong to think that there was one over ruling king of these kingdoms of the early Saxons, power was shared and parts of the kingdoms hived off to friends and family to rule. Kings and sub kings seemed to rule together and intermarriage between other dynastic families was common.

In AD 665–668 Cenwalh quarreled with Bishop Wini, of Dorchester on Thames, who sought refuge with the Mercian king Wulfhere, which possibly is why Winchester and not Dorchester became the capital of Wessex.

According to the Anglo Saxon Chronicle, Cenwalh died in the 672, and was succeeded by his widow, Seaxburh who held power for about a year, which suggests that Cenwalh did not leave any heirs.

Seaxburh was the only female ruler in this dynasty. She was succeeded by Æscwine who reigned from about AD 674 to 676 and was thought to have been distantly related to Cynric.

The importance of the rule of Cenwalh in making Winchester his capital and establishing it as a Christian centre is pivotal in Hampshire’s history. It was from this decision that all the importance, wealth and power of Wessex and then Hampshire flowed.