The Butter Cross of Winchester

The Butter Cross of Winchester, to give it its commercial name, is in fact a Holy Cross

Upright crosses were a feature in the early Anglo Saxon Christian community. Stone sculpture in the form of monastical buildings and crosses, had a big impact on ordinary people, demanding attention with a permanence that signaled both the identity and the status of a place. It marks out a place as somewhere special or different. Beside the Cross, an alley way leads past the site of King William the Conquerors house or palace, built not long after the invasion and St Lawrence’s church on the opposite side of the alley way, on the site of his chapel. Maybe an original cross was already here at this time. 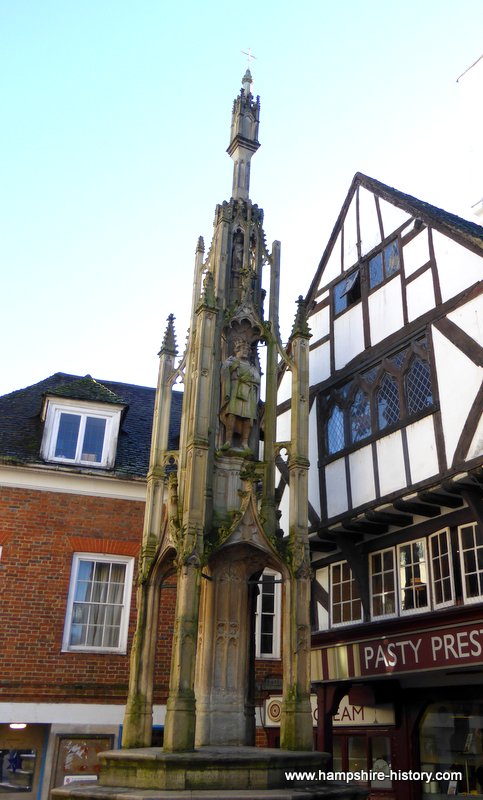 The Butter Cross of Winchester is a Holy Cross, dating back to the mid C14th, it is thought it may have been a gift of Cardinal Beaufort who was Bishop of Winchester from 1404 – 1447. It may well have replaced a much earlier cross associated with the monastic buildings and the Old Minster.

The earlier crosses were often carved with quite complex iconography and richly painted. Certainly the C15th Butter Cross is replete with figures. There are twelve of them, the Blessed Virgin and a plethora of saints, Bartholemew,Peter, Swithun, John, Lawrence, Maurice and Thomas. Later figures added are those of William of Wykeham, Lawrence de Anne, King Alfred and the oldest either representing St John the Evangelist or St Amphibalus.

Selling butter at the cross and much else besides

The cross with all its pinnacles, rests upon five octagonal steps and being situated in the High St in the centre of the commercial world, the steps lent themselves to having the wares of traders arranged upon them. Butter, cheese, eggs, milk all were probably sold from the steps of the cross to the good people of Winchester. 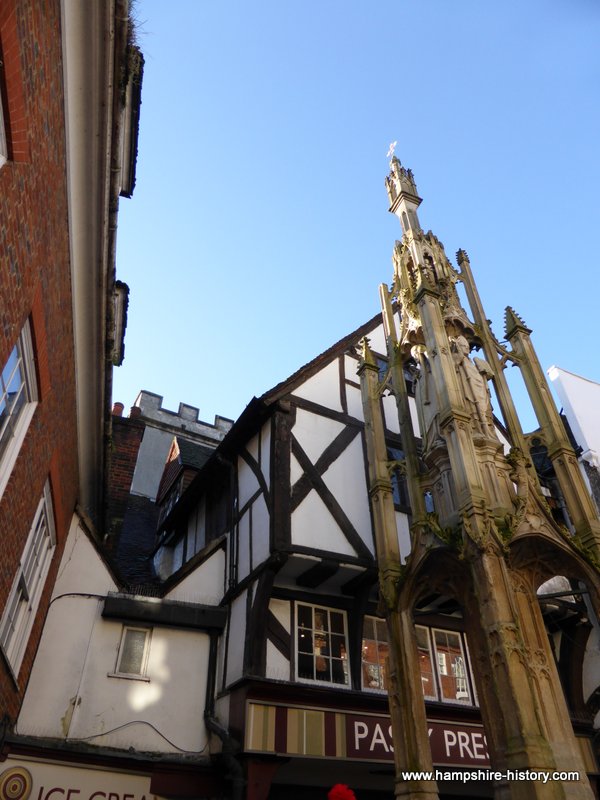 King Henry VIII’s Dissolution and Cromwell’s Civil War, both blew through Winchester, leaving a trail of tumult and destruction behind them but somehow the Butter Cross survived the worst of it. In 1770, its sale to a squire, Thomas Dummer, who thought it might look fine on his estate, was met with an angry response from local people, who gathered at the cross and drove away the men who had come to collect it.

The Victorians could not leave it alone and the architect, Gilbert Scott, was tasked with its restoration in 1865.