Antarctic Expeditions and the Hampshire Connection

The early C20th Antartic expeditions had some interesting links to Hampshire 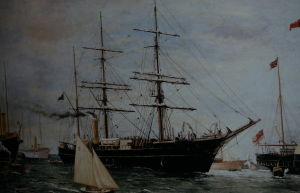 The early C20th expeditions to Antarctica, stirred the imagination of the British people at a time when life was becoming increasingly difficult in the country. British pride had been rather dented post the Boer War. There was a need for the country to feel a sense of pride again and the Antarctic  expeditions seemed to grip the public imagination. It was a worldwide obsession with Antarctic exploration that would see sixteen expeditions set out from eight different countries.

Great names of Antarctic exploration were made during these expeditions and there are some interesting connections with Hampshire.

The first of these expeditions was led by Scott, accompanied by Shackleton and others who would become heroes, showing great strength of character that would endure in the minds of the public to this day. 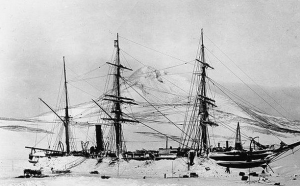 Robert Falcon Scott was born in Devonport on 6th June 1868. His father John, was a brewer but many generations of his family had been in the service of the Royal Navy and Scott was destined to follow in their footsteps. He was sent to Stubbington House, Fareham, Hampshire, at the age of twelve, to be coached for a cadetship in the Royal Navy and joined the training ship HMS Britannia, Dartmouth, at the age of thirteen.

It rapidly became clear that Scott was destined for greater things and by 1899 he was offered command of the expedition being organised by the Royal Geographical Society and the Royal Society to the Antarctic. The purpose of the expedition was to explore deeper into the continent of Antarctica and to extend the knowledge from the exploration of James Ross in the mid C19th. A survey ship,Discovery, was purchased in 1901 and Scott was promoted to Commander on taking up his duties.

The expedition team left Cowes on the Isle of Wight, on 6th August 1901, after an inspection by King Edward VII and Queen Alexandra. Discovery would be the last three wooden masted ship built in Britain.

On board the Discovery was a crew member, William Lashley, who was a stoker in the Royal Navy serving onboard HMS Duke of 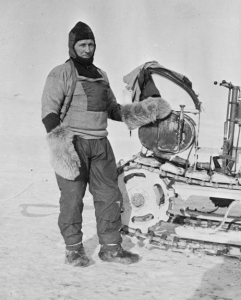 Wellington. He had been born and brought up in Hambledon Hampshire, his father a thatcher. William Lashley proved to be a great asset to the expedition. A very fit and healthy man, his strength of character, quiet, measured and dependable, made him one of the expeditions most useful and reliable men. He was a member of Scott’s “Farthest West” party exploring Victoria Land,  in 1903.

So, on 8th February 1902, the ship anchored in McMurdo Sound at Ross Island at the foot of Mount Erebus. The team base camp became known as Hut Point and remained so for the next two years.

The first venture southwards put extreme physical and mental pressure on the team that included Scott and Shackleton. They had traveled further South than any other human being but it had taken its physical toll on the men.

In October, Scott set off on a second expedition, heading west to explore the polar ice cap. His team included stoker William Lashly. The Discovery meanwhile, remained trapped in ice despite attempts at releasing it by the ships Morning and Terra Nova. Scott received orders from the Admiralty to return, and if necessary, abandon the Discovery if it could not be released from the ice. However, during the first week of February, the ice began to break up and all three ships could depart on 16th February.

The expedition had been an overwhelming success. The work undertaken by the crew should not be underestimated because not only had they explored further South than others had before, they had been able to take soundings of the Ross Sea, investigate the geology of the continent, fix the position of the South Magnetic Pole and undertake observations of the natural life of the continent.

The expedition reached Britain in the autumn of 1904, arriving at Stokes Bay, near Portsmouth on September 10th. The welcome from all the small vessels in this Hampshire port was enormous, she was escorted into Portsmouth harbour, where she was welcomed with a guard of honour from the naval ships moored there.

On Scott’s second expedition in the ship the Terra Nova in 1911–1913, the Hampshire man, William Lashly was once again  invited to join the team.

Initially he was in charge of one of the expedition’s two motor sledges which they were using to keep the teams supplied. The sledges were unreliable and eventually broke down and the men in the team had to haul their supplies themselves.

William Lashley was to show incredible strength of character on this expedition. It was thought he would be selected by Scott to be part of the team to push for the Pole but a change of plan meant that he, along with Lieutenant Evans and Tom Crean, found himself  a member of the last support party to be sent back by Scott on his way to the pole. It was to be a tough journey for the Hampshire man.  During the 730 mile return journey, Evans became seriously ill with scurvy, an illness that had plagued both this and the earlier expeditions and eventually collapsed. Lashley and Crean refused to leave him and they stapped him to one of the sledges in an attempt to drag him to bon 11 February collapase camp at Hut Point. Eventually they were forced to stop with rations running outsed, unable to walk any further. Lashly then stayed with Evans in the tent to nurse him while Crean walked the remaining 35 miles alone in 18 hours to reach base camp. A remarkable feat by all concerned.

Both Lashley and Crean were awarded the Albert medal for their bravery.

William Lashley returned to live in Hambledon in 1932 where he built a house which he named ‘Minna Bluff’ after one of the features on the expedition road to the South Pole, which you can see on East Street. Just around the corner the village remembers their famous son in Lashley Meadows, whilst on the continent of Antarctica, his bravery is remembered by having both the Lashley Mountains and the Lashley Glacier named after him.

The diary and letters of William Lashley

The Scott Polar Research Institue has an archive which is home to letters written by Lashley to his family whilst on expedition, they can be found in the archive (MS 1924). William Lashley also kept a diary that was made into a book.

Click for maps of the Antartic, created during and after the expedition.