Abbey House, built upon land once a gift to Queen Mary Tudor and now the residence of the Mayor of Winchester

The site of Abbey House was once occupied by the Abbey of St Mary and St Edburga, formerly the Saxon Nunnaminster. When the abbey was dissolved in 1539, most of the buildings were destroyed. The land was then gifted to Queen Mary Tudor to celebrate her marriage to King Phillip of Spain, which took place in the cathedral in 1554.
The land appears to have been divided and in the early C18th a house and garden were built on part of the site.

So who built Abbey House?

The man responsible for building the house was William Pescod, the Recorder of Winchester. Originally it faced its rear gardens, which were magnificently laid out. Abbey House was then re-designed and a castellated front added in 1771, which is the Abbey House as we see it today, now facing out onto Broad Street. It seems to have had multiple functions, as by the 1790’s it was being used by Benedictine nuns who were fleeing from persecution in France. By the end of the C19th, having changed hands a number of times, the building was acquired by the City Council for public purpose and since then has been the residence of the Mayor of Winchester. 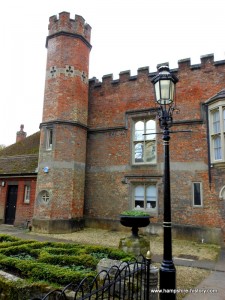