Winchester Palace in Southwark, an incongruous reminder of the importance of 12th century Hampshire

It’s always fascinating to find connections with Hampshire’s history outside of the county and a stroll around Southwark on the south bank of London’s River Thames delivers just that.

Winchester Palace was founded by Bishop Henry de Blois during the 12th century to accommodate the Bishop and his household when on business in London. 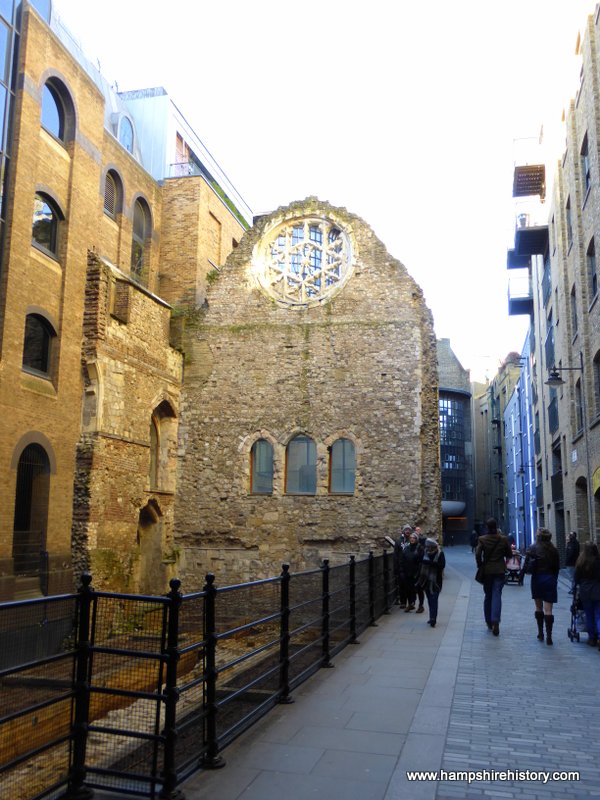 A crossing had existed over the River Thames in the area of the present London Bridge since pre-historic times. The City of London sat on the north bank of the River Thames and on the south bank, on a natural causeway above the surrounding swamp and marsh stood Southwark. A wooden bridge or a ferry ride connected Winchester Palace with the city. The advantage of being on the South bank was the supply of fresh water to provide for the copious number of fish ponds the Palace and its community required.

King Henry II, after the death of Thomas Becket, commissioned a new stone bridge, with a shrine to Becket at its centre. The bridge was begun in 1176, after the palace had been built and completed in 1209. The new stone bridge very probably contributed in large part to the expansion of Southwark, which serviced the City of London with all its needs.

Old London Bridge 1483. One of the oldest drawings of the bridge.

On the south bank therefore was the Guildable Manor, at the bridgehead, Winchester Palace in the western Manor of the Clink, Paris Garden beyond, Thomas’ Hospital in Great Liberty and Bermondsey.

Winchester Palace was a large establishment built around two courtyards with its own brewery, butchery and prison. It was a place of relaxation and pleasure and over time a tennis court, bowling alley and gardens were added. It had its own jetty out into the Thames where goods could be loaded and unloaded. 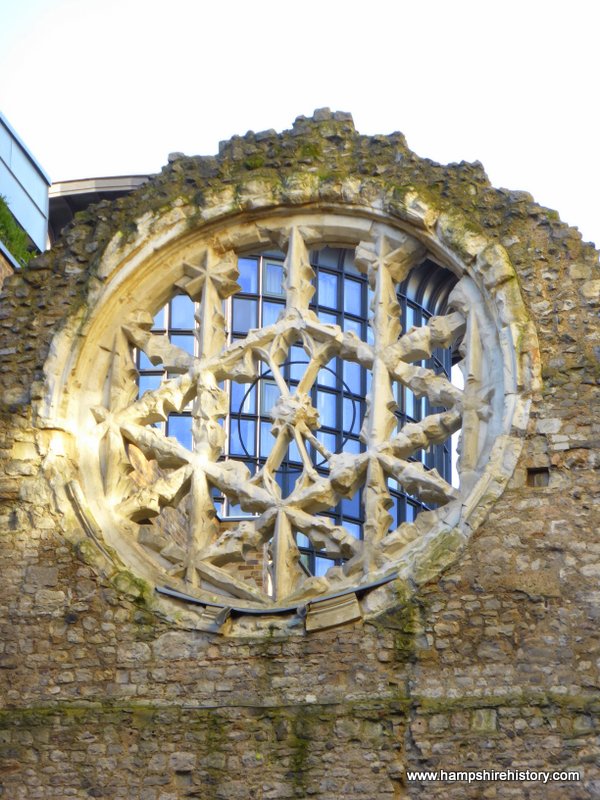 Surrounding the palace though were some of the most insalubrious establishments. Southwark filled its streets with breweries, tanneries, laundries, taverns, theatres and brothels. It attracted sailors and fishermen and became known as a place in which immorality and crime were never very far from the surface. It was the place where Shakespeare saw his plays performed and where Dr Johnson enjoyed a drink or two.

The brothels were licensed by the Bishops of Winchester who very happily took rents and fines from the brothel owners. Prostitutes had been driven out of the city but they plied their trade across the river by painting the sides of their buildings with the names of their establishments. Watermen did a brisk trade ferrying clients back and forth under the cover of darkness and the Bishops of Winchester rubbed their hands with glee no doubt.

The prostitutes became known as ‘Winchester Geese’. Despite being very happy to make money from these poor souls, the church refused them burial in consecrated ground and so a burial place away from the parish church was created and these sad little geese were buried there, along with others such as paupers who lived on the margins of society. When the Crossbones Graveyard site was excavated back in the 1990’s, it was estimated that maybe as many as 15,000 skeletons lay buried there. Many of the remains were of very young women who already had signs of advanced syphilis etched on their bones. Many of the Winchester Geese were no more than children when they began their work as prostitutes.

Close to the Palace was the Clink Prison, again regulated by the Bishops of Winchester and a good source of income for them. The bawdy houses brought in a steady supply of customers for the prison.

The palace continued to be used until the mid 17th century and then the area fell into a state of disrepair and other buildings grew up around it. It was rediscovered in the early 19th century when the masonry that had been masking it collapsed. 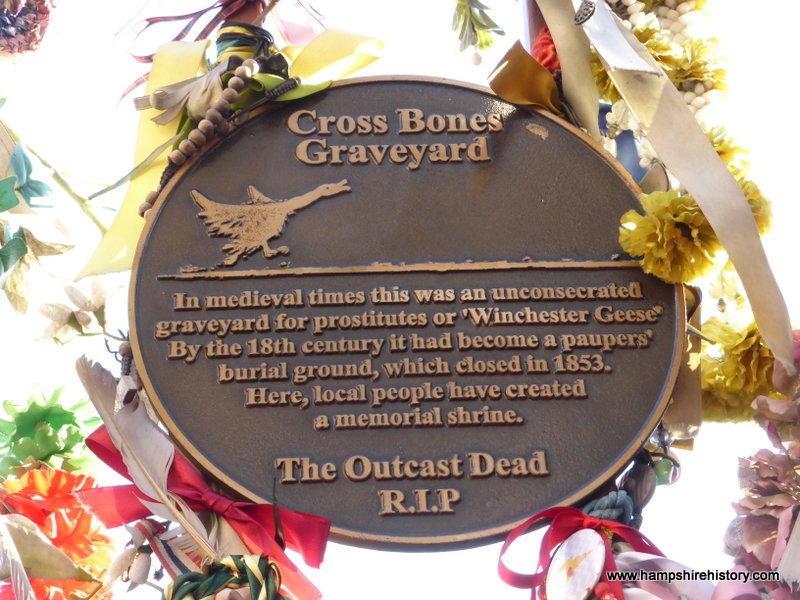 Posted in Architecture and Artefacts, Castles and Palaces and fortifications