September 29, 2015 / HLB / Comments Off on William Wyllie Maritime Artist
This entry is part 10 of 10 in the series Hampshire People
Hampshire People

William Wyllie was a prolific and prodigious artist, whose love of the sea and all things maritime resulted in paintings where the sea spray and wind almost wet your face, so well has he captured the movement of the water.

William Wyllie was born in London in 1851, the son of an artist. Before he had reached his mid teens, the young William was immersed in the art world. He attended the Royal Academy by the age of fifteen and won a Turner gold medal by the age of seventeen. 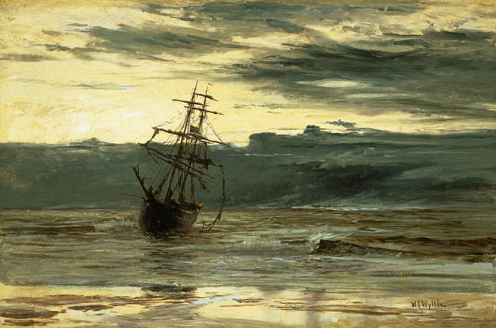 Dawn After a Storm by William Wyllie 1869. The picture that won him the Turner Prize.

He worked under artists such as Landseer and Millais but his heart was captured by the work of Turner and he carried the sense of movement and energy of water and sky into his own works. As much as Wyllie loved art, he also loved the sea and took himself off upon the water as often as he could, sketching from the decks of boats, oblivious to the energy of the water around him. His work was in demand as an illustrator of maritime periodicals. He also worked for the White Star Line. At the age of twenty five he became engaged to Marion Amy Carew, who was only sixteen years old. They had nine children, five sons, all of whom served in WWI. Two of these sons lost their lives, Robert in 1914 at Messines and William at Montauban in 1916. They are remembered in Portsmouth Cathedral. He himself was allowed in and around the fleet in harbour, to sketch and paint the ships, capturing the moment rather like a war artist today would.

William Wyllie lived in London, Chatham and Hoo in Kent with his wife Marian for most of his life but in 1907 the family acquired a property in Old Portsmouth.

The property stood in Capstan Square adjacent to the Round Tower and once Wyllie had added a tower to the top of the building for his studio, he was able to have a view of the Solent. A walk around Old Portsmouth leads you to Tower House, whose tower is topped by a wind vane itself topped by HMS Victory. If you stand to the left of the house by the Round Tower, you will get some idea of the view William Wyllie must have had of the entrance to Portsmouth Harbour. His work for the Royal Navy took off at this point and he became swept up into the life of the Royal Navy who adopted him as one of theirs. He did not spend all his time here, in the 1911 census he is living back in London with his family. 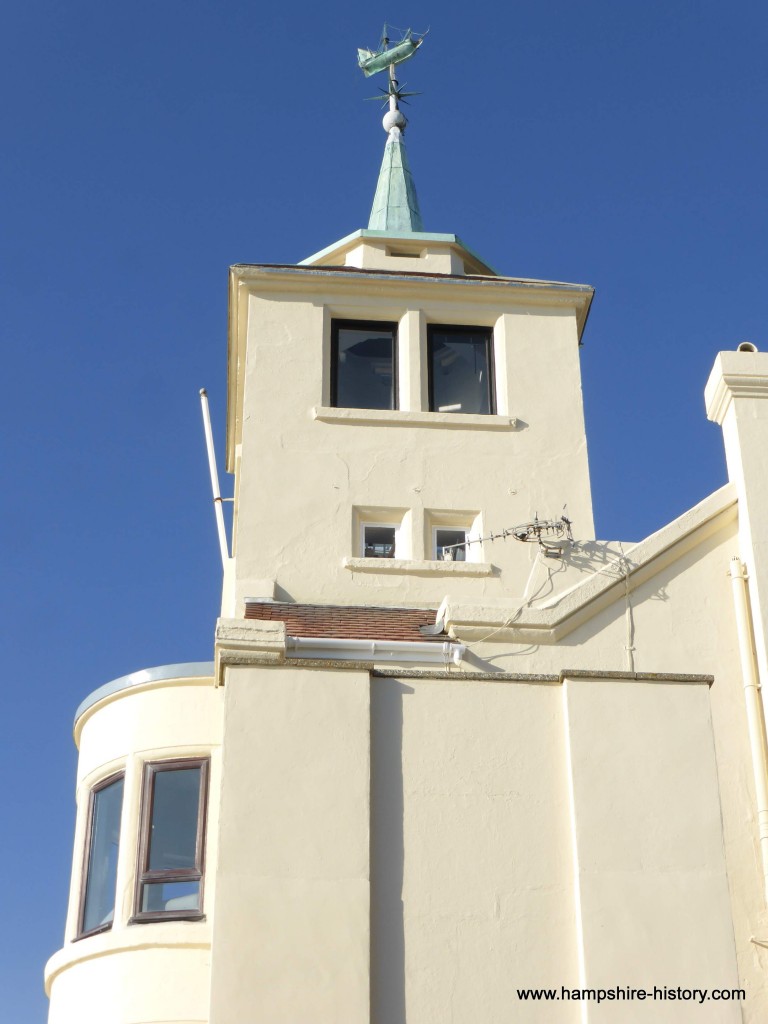 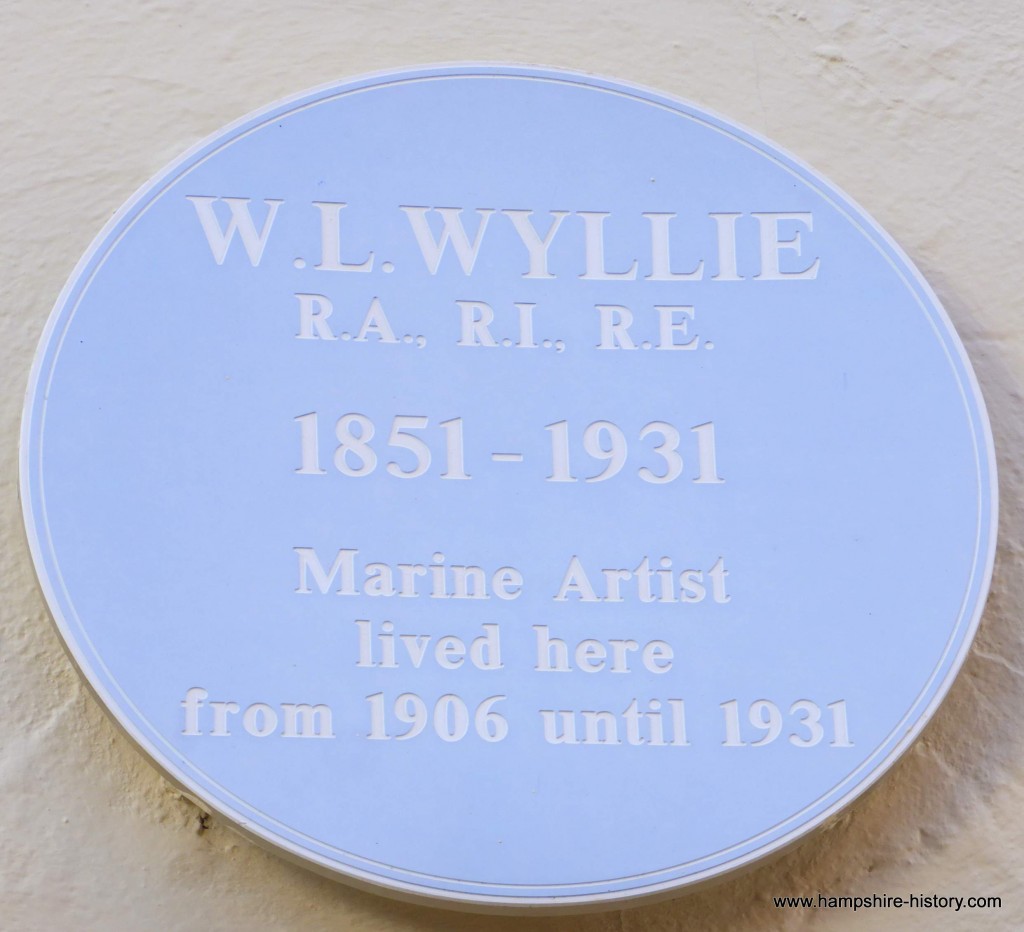 His interest in British naval history resulted in him becoming one of the leading voices calling for the restoration of HMS Victory and thank goodness for that. His painting of 1925 depicting the restoration is a fascinating piece of social history. 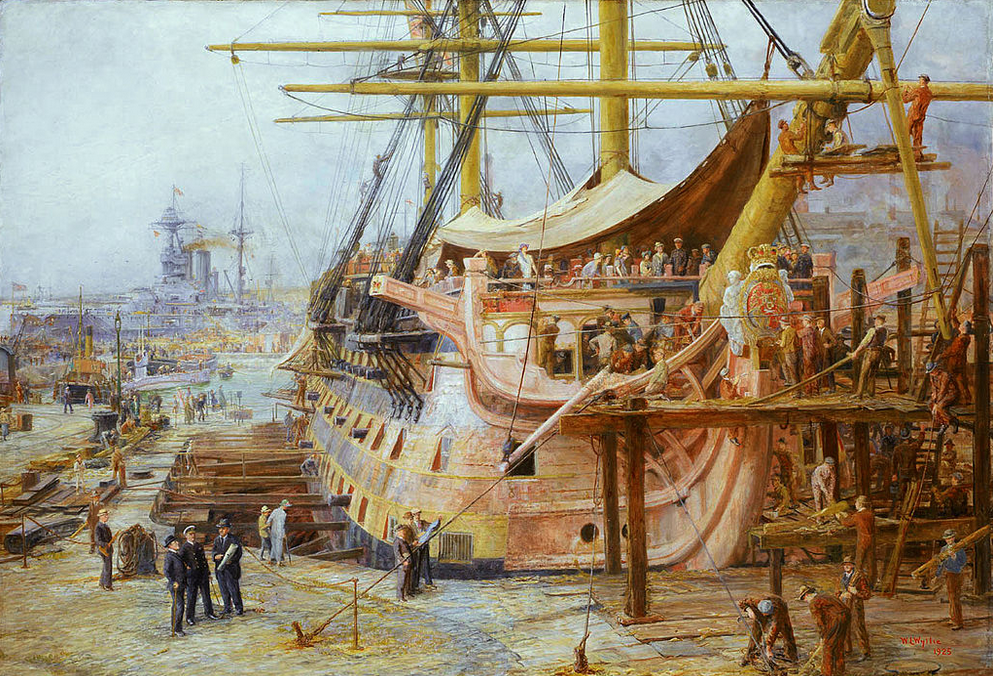 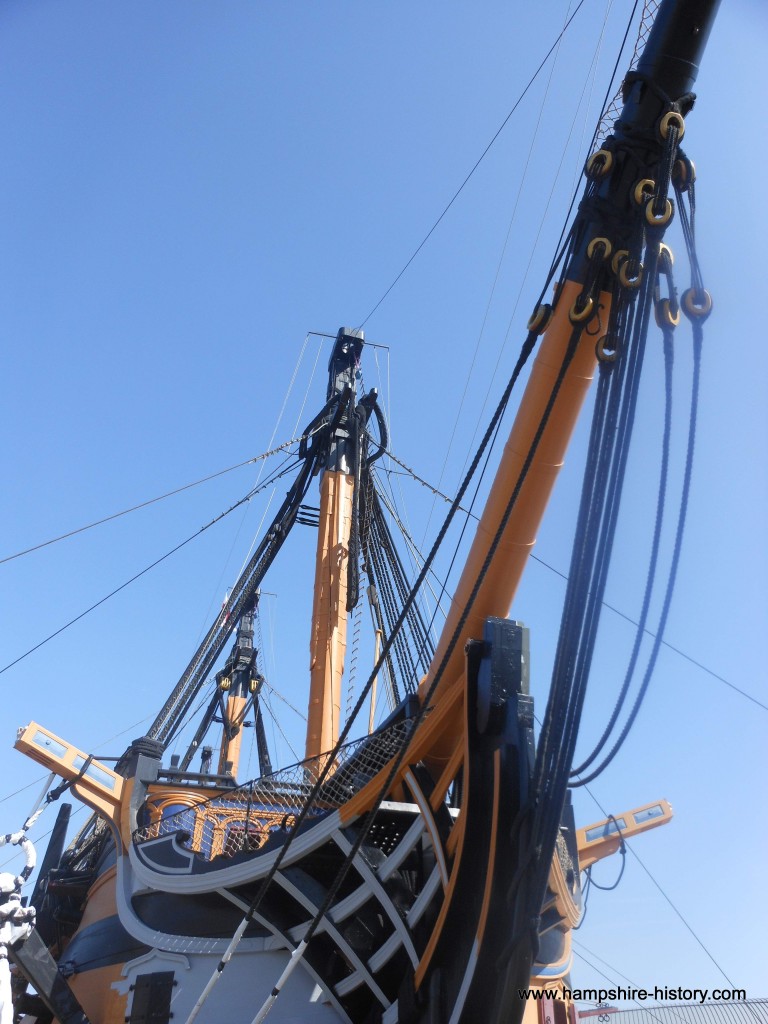 The panorama of the Battle of Trafalgar

He painted a magnificent panorama measuring 42 feet by 12 feet, of the Battle of Trafalgar which was unveiled by King George V. The panorama can be seen at the Royal Naval Museum in Portsmouth.   It is well worth the visit. Consider that this painting was done by William Wyllie, working on a step ladder when he was in his late seventies.

His ability to capture the majesty and movement of all sorts of ships was considered to be amongst the best maritime painting ever done.

When William Wyllie died in 1931, he was honoured by the Royal Navy, his body conveyed up Portsmouth Harbour to his final resting place in the church yard of St Mary’s within the walls of Portchester Castle. His work can be seen in all the major galleries in Britain including the National Maritime Museum and the Tate. 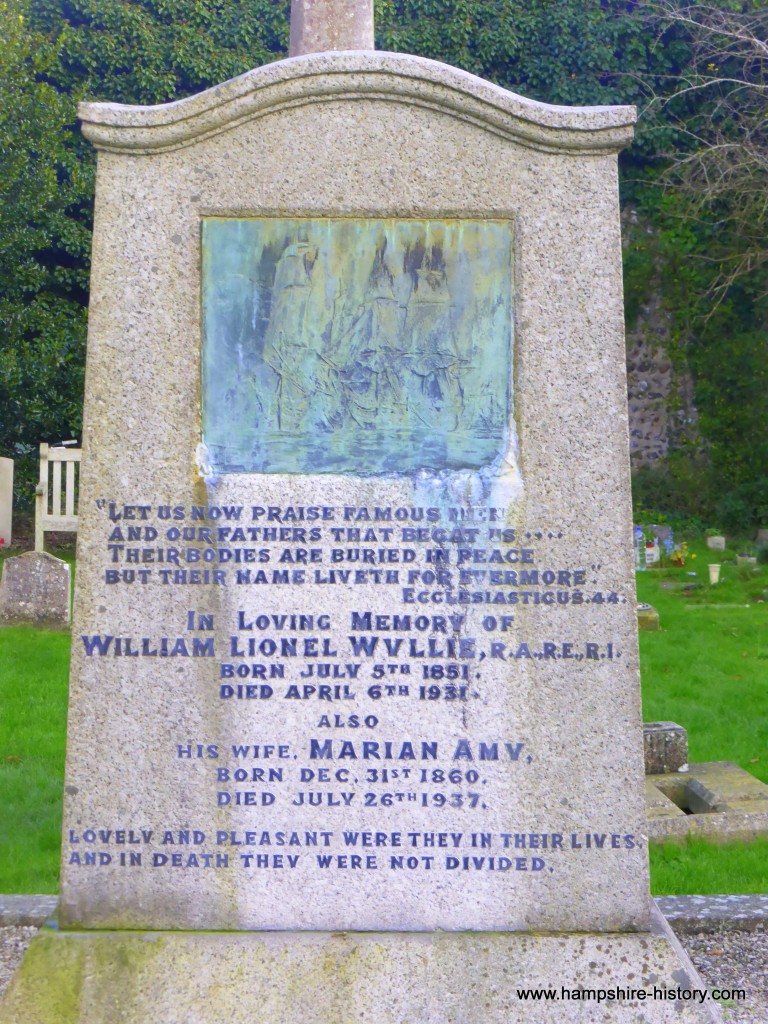