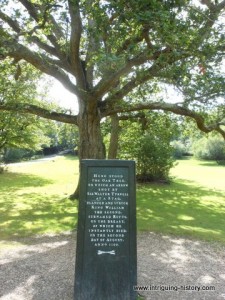 The life of King William Rufus is inextricably bound to the county of Hampshire but it is his death in Hampshire’s New Forest that seems to have captured the imagination of every schoolchild in England. Quite possibly, because of its unusual circumstances, it is the one royal death that we all remember.

William Rufus knew Hampshire well. On hearing the news that his father, King William I, was dying, he hurried from St Gervaise in France to Southampton, from where he rode quickly to Winchester.

Winchester held the treasury and William Rufus was determined that he would control the fortune amassed there. Like his father before him, Winchester became his base and from here he extended his father’s feudal system including a significant strengthening of the Forest Laws.

The Forest Laws were a set of laws instigated by William the Conqueror, a great lover of hunting. This operated outside the common law, and served to protect game animals and their forest habitat from destruction. The penalties for breaking the various laws were severe but under Rufus they became even more so. He handed out death and mutilation as the penalties for interference with the King’s deer.

Killing a deer was punishable by death. Those that shot at a deer had their hands cut off and blinding was the penalty for disturbing the deer.

That William Rufus should be killed in the New Forest, whilst out hunting therefore, is a bitter irony.

His immoral conduct offended everyone, but especially the Church, who were particularly angry when he defied the Pope and banished Anselm, the Archbishop of Canterbury, to Normandy.

The circumstances of his death were captured in an account by the ecclesiastical historian, Vitalis in “Patrologiae Cursus Completus” and by Malmesbury in “Gesta Regum Anglorum”.

Now each of these accounts are extremely colourful but somewhere in them lies a vestige of the truth.

It is said that the night before William was killed that he had a vision of his own death and that when his friend,FitzHamon came to breakfast with him, he too recounted a terrifying vision delivered by a monk, which saw the King trying to destroy a crucifix, which in turn set upon him. Now one might be forgiven for thinking that the ground was being laid by his friend, so that his death would be seen as something supernatural…

However William Rufus was undeterred and looking forward to a good day’s hunting, called for the horses. He handed Sir Walter Tyrell his arrows saying as he did so, “The keenest arrows to the best marksman.”

Just before they set out yet more messages of bad omens were brought to the party, again one can’t help but think, that if these tales are in any way true, that the company were setting out their story, ready for the questions they would surely face when news of the King’s death broke.

Interestingly, Archbishop Anselm, who had been sent into exile by William Rufus, heard of his death the day before it happened, a messenger arrived at Lyons with the news on the 1st August….

Included in the hunting party was Prince Henry, William of Breteuil, Walter Tyrell and FitzHamon. There may well have been others, the accounts are not clear but when the fatal arrow was fired, Malmesbury says that Rufus and Tyrell were alone. The evening sun made the King take poor aim at a deer that ventured out into the open glade and it was at that moment that Tyrell let off an arrow that glanced off an oak tree and hit William in the chest killing him.

All sorts of tales describe what happened next. It is said his corpse was abandoned in the forest. The knights and nobles fleeing from the incident, whether out of fear that they might in some way be accused of regicide or as it is recorded to pay their respects to Prince Henry is not known. Walter Tyrell, whose arrow killed him, certainly escaped very quickly to France, where he disappeared never to be seen again.

One story is that he stopped at a Blacksmith’s at the first stream he came to and had his horse’s shoes put on backwards so that he could not be followed, this place is still known as Tyrell’s Ford. 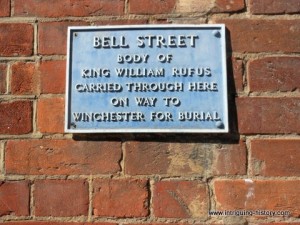 Whatever happened, it is said that the body of William Rufus was found by a charcoal burner called Purkis, who gathered him up and laid him onto a two wheeled wood cart and proceeded to wheel his dead sovereign to the capital, Winchester some twenty five miles distant.

News of the King’s death had traveled fast and people gathered at the city to see William Rufus carried to the Minster in a crude cart.

Quite how he was buried is uncertain, some accounts say he was given the burial of a murderer with no mass said, no bell tolled, Malmesbury however says that he received a funeral with the full rites of the church. He was buried under the tower of the church, which subsequently collapsed, another omen and seen as just retribution for him receiving a christian burial…

The spot where he died was marked with a stone when the oak tree, from which the arrow is said to have ‘glanced’ died.

The inscription on the stone reads;

“Here stood the oak tree, on which an arrow shot by Sir Walter Tyrell at a stag, glanced and struck King William the Second, surnamed Rufus, on the breast, of which he instantly died, on the second day of August, anno 1100. King William the Second, surnamed Rufus, being slain, as before related, was laid in a cart, belonging to one Purkis, and drawn from hence, to Winchester,
and buried in the Cathedral Church, of that city.”

No one shed tears for William Rufus, the stories that preceded the hunt, the manner of his death, the fleeing of the rest of the hunting party, the abandonment of the body, the role that the ‘insignificant’ and yet named, charcoal burner played and his hasty and simple burial, all seem to point at a suspicious death, a murder.

His brother, Prince Henry and the rest of the country all had good reason to want him dead and fate in one guise or the other seems to have played into their hands.