Vikings move against Wessex and King Alfred is kept busy

By the middle of the C8th, the Kingdoms of Mercia, Northumberland and Wessex, were not only fighting amongst themselves but they were having to contend with raid after raid from the invading Vikings.

The Viking ‘Great Army’ landing occurred in East Anglia, in AD865, they made wide territorial gains and within ten years, Mercia and Northumbria succumbed, only Wessex was left.The establishment of the Vikings to the east of Wessex brought problems for its rulers. In April 871, King Æthelred died, and Alfred his brother, succeeded to the throne of Wessex and thus inherited the problems of the Viking invasions.

It was under their new leader, Guthrum, in 876, that the Danes made another attack into Wessex, this time at Wareham in Dorset. Sailing around the coast, they quickly took hold of the town and Alfred was forced into another negotiating situation again, this time with an exchange of hostages. 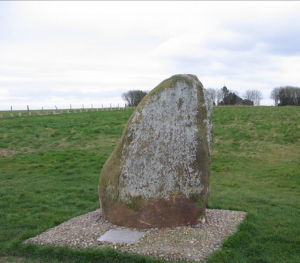 Monument at Possible Site of Battle of Edington

Once at Chippenham, Alfred sealed the area so that no food could reach the enemy and within two weeks Guthrum was ready to negotiate a deal of surrender. It involved not just the usual hostages and payments but also Guthrum’s promise to convert to Christianity. Within three weeks, Guthrum and twenty nine of his army were baptised at Aller near Athelney, with Alfred receiving Guthrum as his spiritual son.

The power struggle between these two men and their resolution of it, can be seen in the ‘Treaty of Alfred and Guthrum’, which was drawn up between them in AD 879 and is still in existence, held at Corpus Christi College Cambridge. This is one of the few official documents of Alfred’s reign. Although fighting continued between the Vikings and the Anglo-Saxons, this treaty marks the end to a war that seemed lost when Alfred ascended the throne.

The chronicler of King Alfred’s life, Asser, was writing of these events in AD893 and it is his chronicle that gives the most detail of these tumultuous events in Wessex.