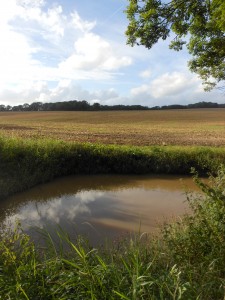 When King Cuthred died in AD 756, he was succeeded by a distant kinsmen, Sigebert.

Whatever else was the cause for Sigebert’s election, the usurpation, was very likely to have been in response to the marriage of the Wessex heiress Cynethryth to the now King Offa of Mercia.

Cynethryth was a very important woman, being the daughter of King Cuthred. The Wessex Royal House did not want to be absorbed by the Mercian Royal House and so Sigebert was elected by the Wessex nobles. By this action Mercian supremacy over Wessex is lost.

But not all was well in the House of Wessex and King Sigebert, after only one year as King,  the Witan or National Assembly, a council of nobles, deprived himof the greater part of his Kingdom, leaving him with the land known as Hampshire.

Sigebert took refuge in the forest, at a place called Privets-flood, where he was murdered, stabbed to death, by a local swineherd.

The Anglo Saxon Chronicle tells us that this murder is to avenge the death of Cumbra.

What is of great importance to Hampshire historians is that in the telling of this story in the Chronicle, it becomes the first written record of the county of Hampshire.

From the Anglo Saxon Chronicle: