The Great Yew of Selborne Remains of the great yew at Selborne

It is not just historic deeds and doings, churches and castles, kings and bishops, that are reflected in the history of Hampshire, it is also a county that is home to some of England’s greatest yew trees.

No one is quite certain why England’s churchyards contain yew trees but several theories have been advanced, that they represented eternal life, they kept cattle off sacred ground or they marked an earlier pagan spot, what is obvious though is the great antiquity of some of these trees.

St Marys church at Selborne was founded in Anglo Saxon times and is called a Royal Foundation because it is believed that the land on which it stands was given by Edith, wife of Edward the Confessor. The church as it is viewed today is Norman in style and thought to be dated to 1180.

However on the approach to the church stood a massive yew, its crown taller than the tower of the church with a girth of 26 feet, suggesting an age of 1400 years. This mighty tree was planted therefore in about 600AD, maybe at the same time as the original Saxon church was built, when Wessex first converted to Christianity. Or maybe it marked the site of pagan worship, who knows.

The great yew at Selborne was brought to its knees though, after a big storm on 25th January 1990 and although its trunk was replanted, no new growth has regenerated. The church contains many items made from the wood of this tree, that stood sentinel over the church for its entire history. The font lid being just one. 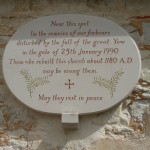