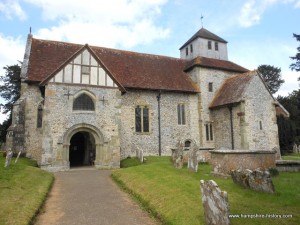 St Mary’s church Breamore is thought to have been built as a Saxon minster on a royal estate and evidence has been found that it does in fact occupy an eastern corner of a large enclosure. Even today it has the sense of being part of an estate. The Anglo Saxon inscription ovr the South Porticus was written in the reign of King Ethelred the Unready and is quite simply breathtaking. The church is full of intriguing historical details, from the defaced Saxon rood to the Puritan inspired plaque, telling the congregation to ‘Avoyd Fornification’ but it is the Saxon stonework on the outer walls that reveal the true age of the building and the whole building should be carefully examined from the outside to understand the its Saxon construct.