Saint Wilfrid and the Church at Warnford

Saint Wilfrid has a special connection with the church of Our Lady at Warnford. The church is tucked away beside the River Meon, splendidly isolated from the village it once served. 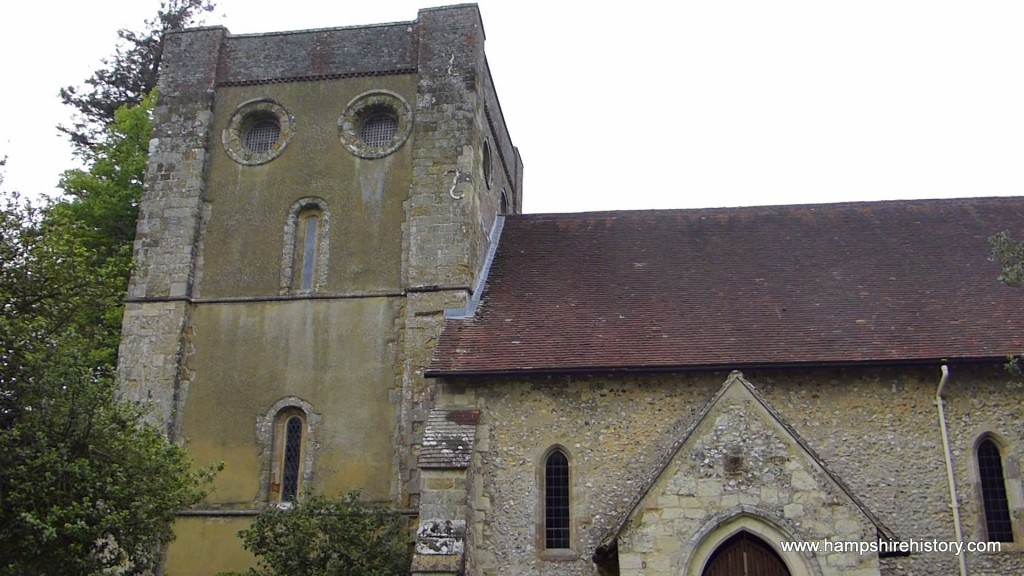 The church has an imposing air and seems to be very much part of its landscape and yet detached from the village that once surrounded it. When the original church was built in Saxon times, the people who came to worship here, belonged to the Jutish Meonwara tribe, who according to Bede, were ‘ignorant of the name and faith of God’.

It was the work of Saint Wilfrid that brought Christianity to the people at Warnford. He and his monks made their way up the Meon Valley from Titchfield. It is worth considering the enormity of the task he had undertaken. Although Christianity had been established close by, there was a church at Winchester in 648AD, the people of the Meon Valley were pagans.

Saint Wilfrid however found a society in which famine and disease had become endemic and they may well have been more responsive to the Christian message because of this. Where their gods had failed, maybe the worship of another may ease their suffering.

The original church at Warnford would have been built mostly of wood but there are remnants of Saxon stone wall still visible in its Norman structure. 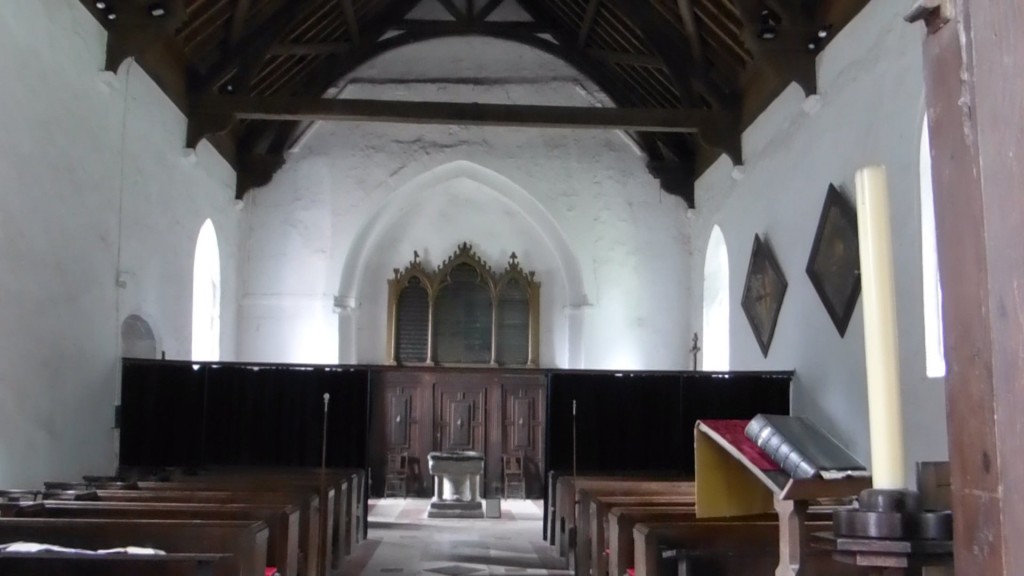 Looking towards the west wall (Anglo Saxon) you can see the original roof outline. The tower is attached to this wall

Certainly when Adam de Port came to rebuild the church in 1190 he believed it to have special links with the saint and had two stone tablets inscribed in Latin to record the fact. On one below what is thought to be a Saxon dial, is written;

“Brethren, bless in your prayers the founders of this temple. Wulfric who founded it and good Adam who restored it” 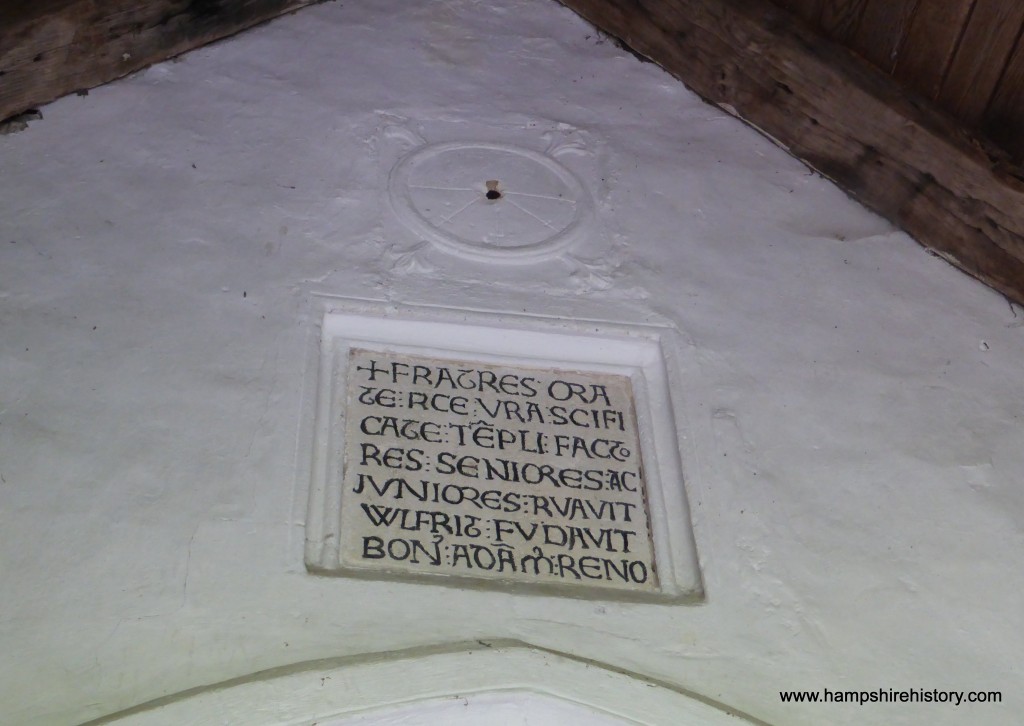 The Saxon dial with tablet below

On the floor is an ancient tablet covering a 13th century burial but it is not known who was buried here. 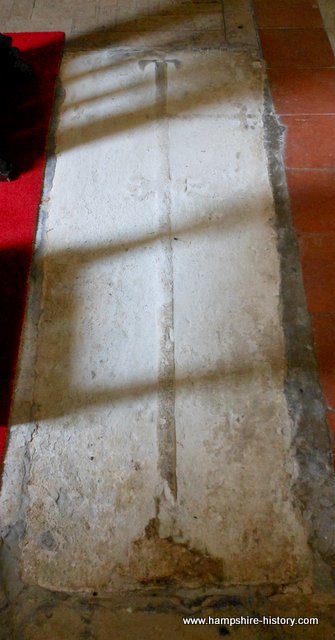 Within the church itself are two beautiful monuments to later inhabitants of the settlement at Warnford, the family of Sir Thomas Neale 1644-99. The Neale family built an Elizabethan mansion beside the River Meon and close to the church. They removed the villagers cottagers to a distant position and the church became more like a private chapel to the Neale family, they gave the oak screens still in the church as a gift. 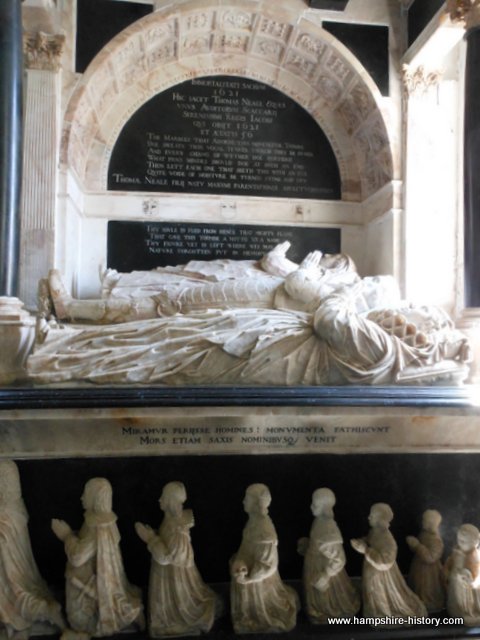 Further extensions, including the building of the tower, took place during the 12th century.

Outside in the graveyard is an unusual headstone, depicting how the unfortunate incumbent of the plot met his maker in 1880. 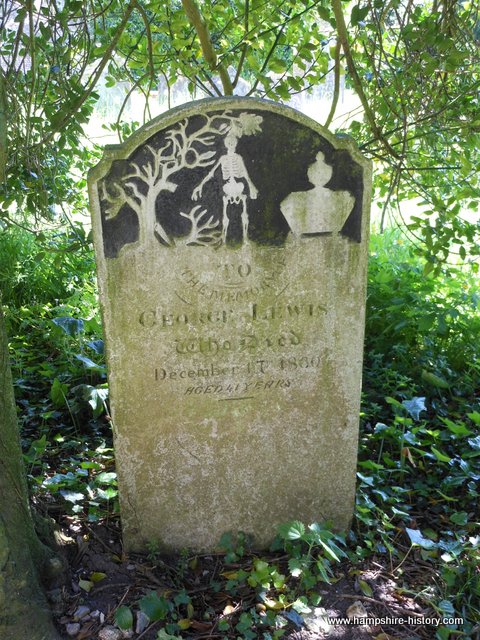 This church and the position it occupies, close to the River Meon is a tranquil and beautiful spot and if Saint Wilfrid did decide to make it his headquarters, it’s not difficult to see why.