The Royal Garrison Church at Portsmouth was originally the ‘Domus Dei’, House of God, built in 1212, by Peter de Rupibus, Bishop of Winchester, to receive those on pilgrimage to either the great shrines at Winchester, Chichester or Canterbury or those who were on pilgrimage overseas or who were part of the crusade.

It also acted as hospital to the sick and needy in the neighbourhood. 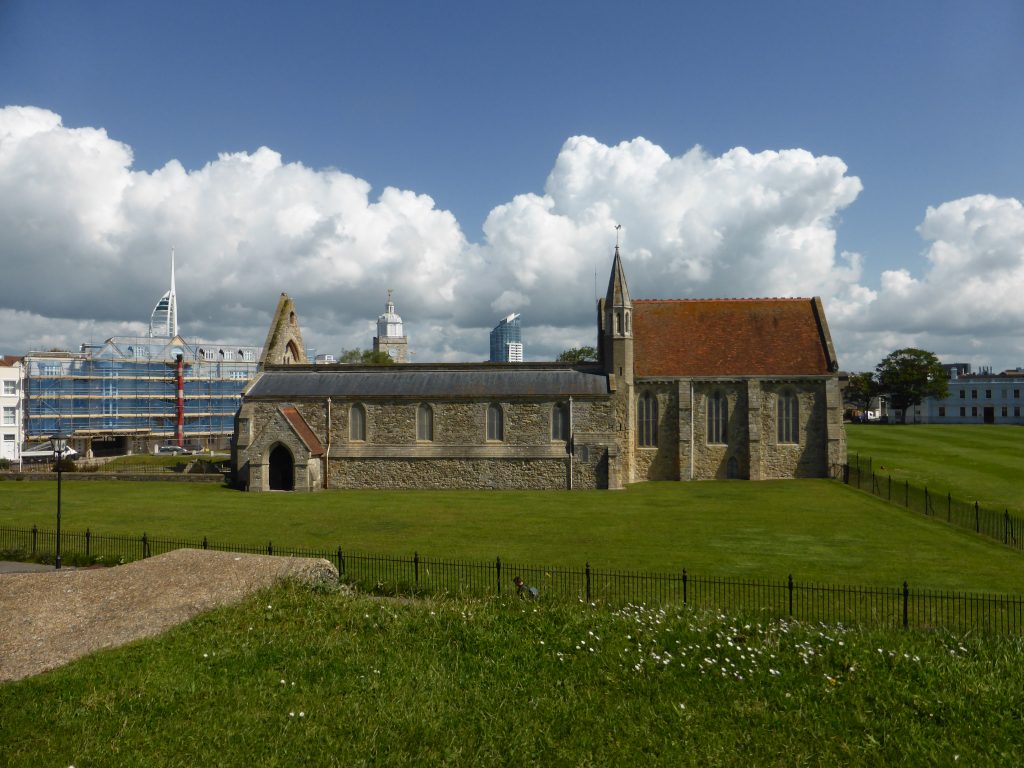 In construction it would have been a long vaulted hall with side bays, in which twelve brethren nursed those in need. Around the hall  itself, many out buildings existed to provide accommodation, kitchens and storage areas  to support the institution.

It would have been visible from both land and sea, the major fortifications had not yet been built and it must have appeared a very welcoming sight to those weary travellers.

Over time, its reputation was established and income and gifts from local estates and grateful visitors began to flow into its coffers, bringing it into conflict with the local church whose clergy felt threatened by its increasing power.

Times were unsettled when King John came to power and he was a ruthless but interesting king, making frequent excursions into France and using the port at Portsmouth to do so, he would have been familiar with the Domus Dei.

This period of history also saw the severance of England from Normandy and in the year after the Domus Dei was established, King John amassed a great fleet and army in Portsmouth with an idea of regaining some lands but he was unable to maintain them and the mission was aborted.

It is easy therefore to see how the Domus Dei would come to be an important and powerful institution, playing an essential role caring for the thousands who passed through the port.

For several hundred years, with the addition of a chantry in 1325, the Domus Dei continued to serve the community. It was the site of the murder of the former Bishop of Chichester, Adam Moleyns, who had been sent to Portsmouth as Keeper of the Privy Seal to make reduced payment to the shipmen of Portsmouth on account of their unruly behaviour during church services.

He was killed by one of the aggrieved shipmen outside of the Domus Dei and the locals excommunicated for fifty years as a result.

One hundred years on and Henry VIII and dissolution saw the end of the Domus Dei. It surrendered its property and goods to the King, much of it ending up in the hands of the Powerscourt family of Ireland.

The hospital fail into disrepair and it was only the strengthening of the fortifications of Portsmouth in the 1580’s that saved it from total collapse.

It was decided to attach an additional building to the structure which would become a residence for the military governor. The Domus Dei itself became the Royal Garrison Church, making it the oldest Garrison Chapel in the world.

Other monarchs have visited the church including King James II, Queen Anne and George III.

The house was destroyed in 1826 and the church restored over the next fifty years. The Royal Garrison church became the centre of spiritual life for the whole military stationed here.

On the night of 10th January 1941, the church was hit by incendiary bombs and although the roof was set alight, the chancel was saved from destruction by the gallant efforts of fire teams and so it thus remains. The nave open to the elements and the chancel with its fine organ screened from the outside.

The Royal Garrison church Portsmouth is now looked after by English Heritage and can be visited for free. The stained glass windows were put in in the second half of the C20th, the windows on the north wall by Harold Thompson of Petersfield, and tell the story of the history of the church.

In the churchyard there is a memorial to General Sir Charles Napier.