Murder of Duke of Buckingham 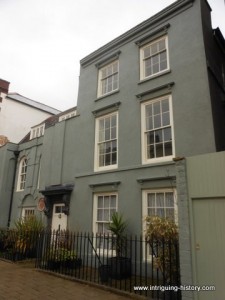 On a fine late Summers morning in 1628, George Villiers, the Duke of Buckingham breafasted early at the Greyhound Inn on Portsmouth High Street. If he happened to notice the infantry man standing with him that morning he would have taken no notice, for the port was full of such men waiting to set sail on a another misguided expedition to France.

His murderer was a young military lieutenant John Felton, who believed that Buckingham, through his incompetent tactics, had caused him and the country such suffering, that murder was the only recourse. He armed himself with a cheap knife and entered the Greyhound Inn, he picked out his victim and plunged the knife deeply into the heart of the Duke, killing him instantly.

Felton passed through the kitchens at the rear of the Inn but gave himself up, preferring to explain his actions and thereby further vilify Buckingham’s name.

So what caused the Duke of Buckingham’s murder?

The Duke of Buckingham was Lord High Admiral of the fleet when he arrived in Portsmouth in 1628 to prepare a fleet for another ‘expedition’ to France. King Charles I had been staying at the Inn just a few days before, having granted Villiers leave to engage in this action.

George Villiers had been a favourite of King James I. The King was totally smitten with the young man who he called ‘my sweetheart’, ‘my own sweet child and wife’. George Villiers, both created and took every advantage given to him by the infatuated King. Moving from Gentleman of the Bedchamber in 1615 to Marquess by 1619. His climb had been swift and he made many enemies along the way.

Buckingham took great care to ensure he made himself indispensable to the King’s son Prince Charles and when King James died in 1625, Charles turned to

his fathers best friend, as his main confidant and advisor

Charles and Parliament fell out nearly from the start of his reign.Parliament attacked the religious policies of Charles, his religious stance was pro – Catholic and he was keen to relax the penal laws against Catholics.This filled Parliament with horror.

They attacked Buckingham for his foreign policy which was openly criticised as incompetent. Buckingham had signed treaties with Denmark and Holland for English involvement in the Danish phase of the Thirty Year War, where 8,000 men out of 12,000 died on board their ships without even landing in the Netherlands. He then compounded this by further attacks, this time on Cadiz in 1625. fifteen thousand men were maneuvered for this expedition but poor funding from a Parliament who did not  want to support Buckingham, saw the exercise fail miserably. Many were killed and wounded and those that returned failed to be paid

Buckingham was, to all intent and purposes, the King’s prime minister. His hand was apparent in many of the main decisions of the day and by 1626, Parliament, led by radicals such as Sir Edward Coke, became more and more critical of Buckingham and started impeachment proceedings against him.

All was in shambles. Buckingham now led six thousand men to the Isle de Rhe, in support of the Huguenot defenders at La Rochelle. By the time he left in November 1627, he had achieved nothing and a half of his force lay dead. The men again, did not receive their wages in full and the whole episode was a humiliation and embarrassment to the British Parliament and her people.

In 1628, Parliament continued to attack Buckingham and sent a remonstrance to Charles in 1628 that declared, that, ‘they feared for England’s religion, her standing in Europe and her success in the Thirty Year War’ if Buckingham continued in power.

Charles would not give way in his support for Buckingham and his response was to merely prorogue Parliament.

And so it was in August 1628, protected by the King but hated by Parliament and the people, that Buckingham went confidently to Portsmouth to see off another of his expeditions.

John Felton was waiting for him. Felton had taken part in the ill fated Cadiz and Isle de Rhe vetures, had been injured, was owed wages, had been overlooked for promotion by Buckingham and was a very melancholy figure.

He had come across a copy of the 1628 Parliament’s Remonstrance against the Duke and had come to believe that the country would be better off if Buckingham was dead and so he decided to murder the Duke and put his sufferings and that of the nation to rest once and for all.

To kill the Duke, Felton imagined, would be an act of personal and national redemption.

Before setting out for the Greyhound Inn, therefore, Felton had written and then sewn into his hatband two apologies for the murder: in them, he insisted that he had acted as a patriot, a gentleman and a soldier and despite three long months of interrogation in the Tower of London, this was the story to which he stuck.

Felton was hung from the gallows at Tyburn, his body brought to Portsmouth, where, it was left to rot, hanging in the chains he had been brought to the gallows in.

So what was the outcome of this murder committed in Portsmouth?

Although the country had rid itself of a man thoroughly hated by the population, his death did not improve the relationship between King Charles and Parliament, which continued to falter as Charles’s support for a more pro – catholic stance continued to gain strength. His struggle to control all matters in Parliament brought King and Commons into conflict again and again, until the dissolution of Parliament in March 1629. Charles then ruled alone until the Short Parliament was assembled in April 1640.