The Mermaid of Nately Scures

The church of St Swithun is home to the mermaid of Nately Scures, as well as being the most perfect example of a Norman apsidal church in the country 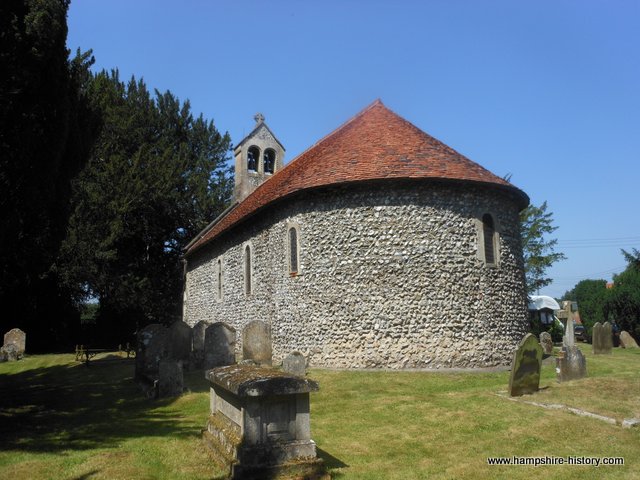 The church at Nately Scures is a striking example of Norman architecture, small but perfect with a nave that is only thirty feet in length. It is an aisle- less church with its eastern end forming an aspe some sixteen feet in diameter. This is a rare thing and only one of a handful to be found in England. Take a look at the above photograph and note how the window in the aspe is not central to it but positioned in a north easterly direction.

The only way into the church is via a north door, again an unusual feature in Hampshire churches but it is not the only unusual aspect of the beautifully carved Norman doorway. On the eastern capital, the Mermaid of Nately Scures looks the visitor in the eye, with her long hair flowing and mingling with the wave crashing over her, she seems to carry on her back a small figure.

The unusual carving of a mermaid has obviously brought with it its fair share of stories as to how it came to be carved here. Legend tells us that a sailor had a love affair with a mermaid and left her to return home. He met and fell in love with a lady from Nately Scures and was set to marry her, when up the River Thames and thence the Loddon and the Lyde arrived at the church and stole him away on her back. The mermaid was carved supposedly to act as a warning to young men who might dally with a young ladies heart. The Mermaid of Nately Scures

Another story from just after the English Civil War, tells us of the love that sustained the lives of a husband and wife

A brass plaque now difficult to read relates a conversation between a husband and his wife, Mary died in 1660 and her husband John in 1661 and this is their epitaph;

Prisoners of hope to eternal life

John then says to Mary;

To thee I come

And my last home

Till the day of Doom

Then shall we wake, rise, live for aye

With Christ a never dying day

To ope the door

I could not stay

But now give way

Come then my dear, we’ll sleep in bliss

And in the dust each other kiss

And then the most beautiful of testaments to their love, they jointly tell us;

Twice sixteen years we lived together

In sunshine and in stormy weather

In wedlock bands husband and wife

In joy, love, peace, void of all strife

And ten times changed our habitation

And here at last we fixed our station,

Where after ten years spent we have

Obtained at last a quiet grave Looking towards the aspe