An open access Hampshire History data project, a transcription of the East Meon Overseers book 1819-1826. The book records the poor relief given to those in the years following the Napoleonic Wars and will be of interest to family historians.

East Meon was an agricultural community, a community that was paying the human price for improvements in agricultural efficiency, enclosures and mechanization. War with France had increased the price of basic commodities and when the war was over, out of work soldiers flooded the labour market.

By 1727, East Meon had its own workhouse, one hundred years later the population of the village had grown and the general economic situation meant that more people than ever were dependent upon poor relief. The workhouse could no longer cope with the number of people needing assistance and outdoor relief was given to 333 parishioners. Outdoor relief meant people were not admitted to the workhouse but were given money directly to assist them.

The overseer determined how much each person received and for what reason, all this was logged in a book. In this case the book is written in the most marvelous black ink, copperplate handwriting with few crossing outs. A sure hand dealing with peoples distress. 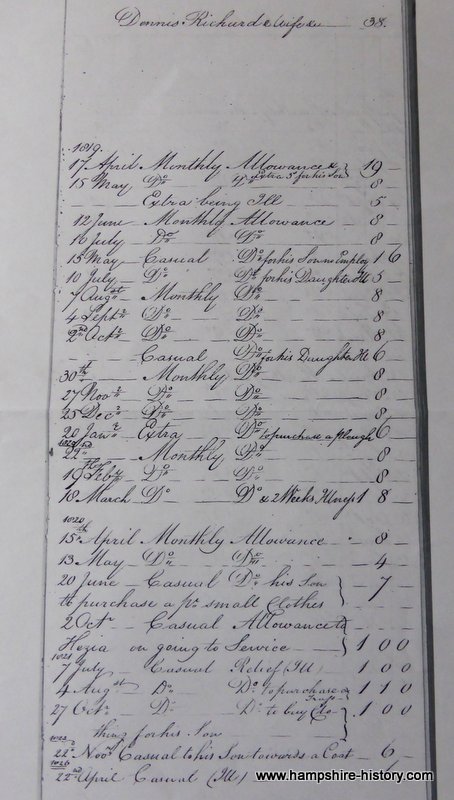 What is in the East Meon Overseers book?

A list of names of people receiving relief payments and sometimes their relationship to others i.e children of, widow of. The dates the payments were made, each recipient had their own page.

It is an interesting document as it precedes the 1841 census and in some instances fascinating details come to light such as those going into service, those who were ill or mothers left to manage on their own. Sometimes payment in kind was distributed e.g bundles of faggots (wood) for fuel.

The Data is available to search by name, free to use in open access and continually added to

This project will be of interest to Hampshire family historians

Connect to the list of transcribed names, as and when more details will be added to each name but should you require details on a specific individual please ask and we will collect them for you.

To give you an idea of the value of the money being handed out, a typical labourer earned about 10s a week.

The document is deposited at the Hampshire Archives 46M68P02