The Knights Templar, quite literally left their mark at Fordingbridge

The county of Hampshire has, tucked away in various churches, reminders of a time when crusading knights were honoured.  The church at Fordingbridge offers a fascinating example of how these crusading men were venerated. The Norman church of St Mary the Virgin, Fordingbridge, replaced an earlier Saxon church sometime between 1160 and 1170. Inside, a 13th century chapel belonged to the Knights Templar or The Poor Fellow-Soldiers of Christ and of the Temple of Solomon. They were among the most famous of the Western Christian military orders and existed as an order for nearly two centuries during the Middle Ages.

Officially endorsed by the Catholic Church around 1129, the Order became a favoured charity throughout Christendom, and grew rapidly in membership and power. Templar knights, in their distinctive white mantles with a red cross, were among the most skilled fighting units of the Crusades. They grew in strength not just through their combative skills but they became increasingly skilled at organizing the economic infrastructure necessary to consolidate the lands they had taken. They also organized the building of fortifications across Europe and the Holy Land.

Outside the church, embedded in the wall is a stone above a tomb, the whole surmounted by an arch.

The slab of stone is deeply incised where deep sword marks were cut into it. The Knights had great respect for their leaders,the Master Knights and thus they would line up and anoint their swords by sharpening them on the stone, above the tomb. 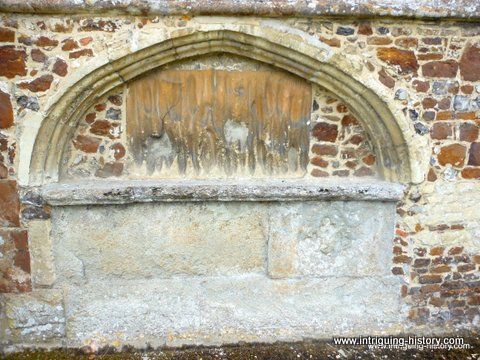 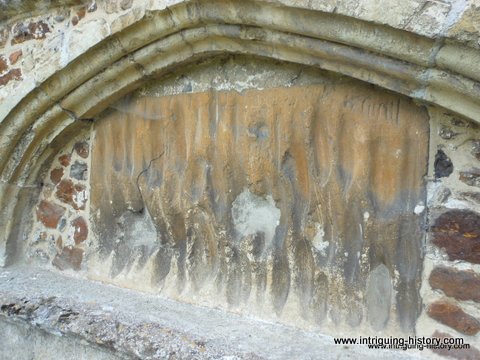