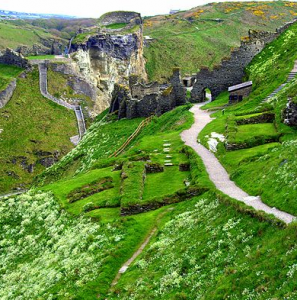 An intriguing piece of early history of Hampshire has its origins in a kingdom ruled by the Domonia lying  to the West of Hampshire, in the current counties of Cornwall, Devon and Somerset, settled into a kingdom several hundred years before other areas of England. The chronicles tell us that the region was well structured from a military and social perspective.

The Dumnonii, whose main area of settlement seems to have been Devon (Defnas, Defnon, Devon) were a people with strong traditions reaching back before the general Celtic arrival. They were building a mix of British hill forts and fortifications whose structures were similar to those found in France and Spain. That they should have developed in this way is unsurprising given the proximity to the coast of France.

The capital of this great kingdom would have been Isca, that is modern Exeter. Archaeology confirms that this site was abandoned in the fifth century, when the eastern portion of this kingdom fell to the West Saxons.

They were a fierce fighting force who put up considerable resistance to the threat of invasion from the Romans, who, it appears, thought the wisest course of action was to leave the Dumnonians to self govern. This allowed them to further establish their rule and to expand into neighbouring territories.

As time passed it appears that other tribes joined the Dumnonians and possibly over ruled them. The suggestion is that the West Midland tribe, the Cornubia moved towards their northern borders and there is certainly a gentle influx of settlers from Ireland and Wales.

Although it is hard to distinguish fact from fiction and the chronology of this period is uncertain, intriguing historic tales exist of this period.

One of them concerns a character known as, Gereint ab Erbin (otherwise known as Gerren or Gerontius. Gerren is well known to those who try to make sense of the Arthurian events in English history. Gerren features in the Arthurian story of Culhwch and Olwen. He is an important character in Arthurian literature, and it is thought that he is possibly the brother of Guinevere, Arthur’s wife.
Consider that Arthur is a great leader in England, possibly leading as a Roman Emperor might have done before him. So what of Gerren and why in terms of Hampshire history might we be interested to know about him?

As brother in law to Arthur, Gerren would probably have been in a position of some power, it is believed he became King of Dumnonia during the height of Arthur’s period of power.

Thinking about the connections between Gerren (Geraint) and Arthur, then we need to consider that Tintagel was an active fortress up through the reign of King Geraint . A Christian grave has been radiocarbon dated to 403 and the Tintagel churchyard is in use throughout the period of occupation. Archaeologists have found so many shards of Mediterranean pottery, that they are called “Tintagel ware”. These shards are from amphora containing wine and oil and this has led to speculation as what purpose the fortress served. It could have been a trading centre, other evidence such as tin ware support  this but without a port is this likely?  It could also have been a royal residence. Betwist the two theories there is a truth, certainly the Dumnonia under Geraint were a rich society and continental trade would have been an important part of this.

So what became of Gerren king of the Dumnonia?

The chronicles tell us that in 510 (possibly 501),  there is a battle at Llongborth (possibly Langport/Landport), Portesmutha (Portus Adurni, Portsmouth), in which a very high ranking Briton is killed by a Saxon chief and two boats of followers. This high ranking Briton is thought to have possibly been Gerren the ruler of the Dumnonia. Arthur is also supposed to have been at this battle.

So a tantalizing link between Portsmouth Hampshire and King Arthur, now that makes for interesting history……