There are several fascinating Medieval documents that exist for Hampshire, amongst them are documents called ‘Feet of Fines’

There are several fascinating Medieval documents that exist for Hampshire, amongst them are documents called ‘Feet of Fines’

The documents origins hark back to the reign of Henry II of England, when the royal justices began the practice of registering the settlement of disagreements over land by having both parties bring a suit before the royal courts. The King through his court, thus gave the royal sanction and the decision was final. 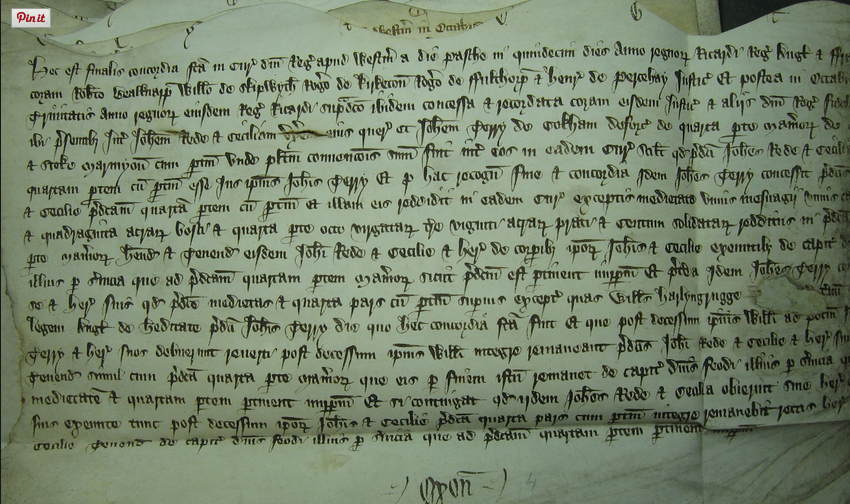 The document was then handled in a way that meant both parties were in receipt of a written copy of the agreement. The text was written in duplicate on a single piece of parchment, this was then cut in a prescribed way so that when they were put back together the cut edges matched. This meant it was difficult to produce fraudulent documents.

This practise evolved so that by 1195, a third copy was taken and cut off, this time to be placed with the treasury and it was this document that became known as the ‘foot of the fine’.

There was no legal obligation to have title registered in this way. Often the fine is one of a series of conveyancing deeds some of which may give more detail about the property.

The first recorded “foot of the fine” is endorsed with the statement;

“This is the first chirograph that was made in the king’s court in the form of three chirographs, according to the command of his lordship of Canterbury and other barons of the king, to the end that by this form a record can be made to be passed on to the treasurer to put in the treasury.”

There are ‘Feets of Fines’, for Hampshire from 1195 – 1509 which can be found with abstracts and links to images on the Medieval Genealogy site

The documents give a fascinating glimpse into the community of Hampshire nearly a thousand years ago. Great Hampshire names such as Adam de Port appear as plaintiff regarding the chapels at East Cholderton and Appleshaw pertained to the church of Amport and in his gift.