‘I never saw so large and so beautiful a construction’

The Grace Dieu, Henry V’s ship, the largest ship to be built in England before 1637, is a wonderful piece of Hampshire history hidden from our sight

As a child, King Henry V, then of course the Prince of Wales, learnt all he ever needed to know about the art of war from Owen Glendower, ‘Hotspur’. He was a great military tactician but he had to wait and chafe for the opportunity to rule before he could put all he had learnt into action. During King Henry IV’s reign, relations with France had been hostile, with King Henry V in charge they were to become much more confrontational.

In 1413, the newly crowned  King Henry V, told the French that he wanted nothing less than the whole of the old Angevin Empire restored, in fact, all of the land that had been lost in the reign of King John.  Of the many things that Henry had learnt about war he knew he had put war on a proper financial footing  and that he had to have the best equipment and the most well trained men to use that equipment.

If he was going to take France then he needed a ship equal to these aims. He therefore commissioned his greatest ship to be built on the banks of the River Hamble. He spent a huge amount of money building a ship on the scale never seen before. It was forty metres long and 15 metres wide with a very tall mast. It was the largest clinker ship ever built using a triple boarding technique. She weighed 1400 tons and from the accounts kept by the King’s ship keeper, William Soper, over 3,700 trees and 23 tons of iron were used in its manufacture.

So whilst King Henry V was busy mustering his troops in the fields of Hampshire, preparing for the battle that would become the Battle of Agincourt in 1415, this great ship was being built on the River Hamble close to Bursledon. Click here for a drawing of the Grace Dieu in the National Archive.

The sadness is that the need for this great warship ceased after the Treaty of Troyes confirmed Henry’s appointment as regent and heir of France. 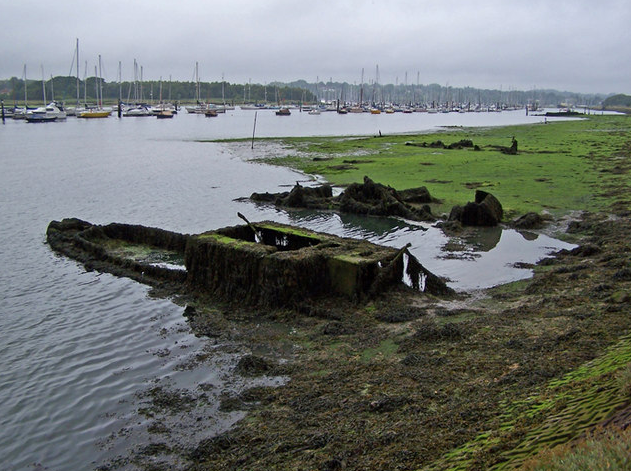 The Grace Dieu was reduced to patrolling the Channel

The furthest this large vessel ever got was the Isle of Wight where its Devon crewmen mutinied. She was then put in reserve and moored in Southampton Water before being brought to the River Hamble in 1434, where her wreck now lies. In January 1439 it is recorded that she was struck by lightening and caught fire. Anything salvageable was taken off and she was left to decline in the mud, close to where she had been built.

Who was William Soper?

A merchant of Winchester and Southampton, William Soper was a competent and skilled administrator, he was soon given charge over the building up of a fleet of ships for Henry V. Although not officially appointed surveyor or clerk of the King’s ships until 1418, from four years previously he had been occupied at Burlesdon supervising the construction of a number of large vessels, and his official accounts date from 1415.  At this point in time King Henry V had stepped up the build up to war and the banks of the Hamble became full of storehouses and dockyards were built on the Hamble, with Soper being put in charge of operations. He became intricately involved in the organization of Henry V’s French expedition of 1415 on his way to the Battle of Agincourt.

The accounts kept by William Soper still exist and have been translated and may be available at the Royal Maritime Museum Greenwich or as a book, The Navy of the Lancastrian Kings.  Accounts and Inventories of William Soper, Keeper of the King’s Ships 1422-1427, Navy Records Society Vol 123, London 1982