October 9, 2014 / HLB / Comments Off on A Georgian Hampshire Scandal

The Georgian Hampshire Scandal of Elizabeth Chudleigh, played out in a beautiful Hampshire house.

Elizabeth Chudleigh, was born in 1721 into an old Devonshire family, strong on character but lacking money. Her father died when she was very young and like so many ‘poor’ aristocratic families, her mother relied upon wealthier family and friends to help the family maintain some sort of position in society.

Elizabeth was fortunate in being considered as a very pretty young woman with a charismatic personality, able to charm with her quick wit and ability to tell entertaining stories. She was found a position at court by William Pulteney, 1st Earl of Bath and became Maid of Honour to Augusta the Princess of Wales and used her position to place herself in the company of aristocratic young men. 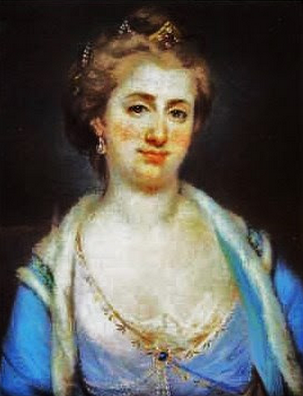 Elizabeth stayed the summer of 1744 with her aunt at the house of her cousin, the wife of Mr. John Merrill of Lainston House and during that time visited the races at nearby Worthy Down Winchester., Hampshire, Miss Chudleigh in the course of the summer went to Winchester races. It was here she met the grandson of the Ist Earl of Bath, Augustus John Hervey. He was a younger son with little money and little prospect of becoming the 3rd Earl but he and Elizabeth were infatuated with each other and determined to marry, despite knowing each other for a very short time. On the morning of the 4th August 1744 they were married in the chapel at Lainston. 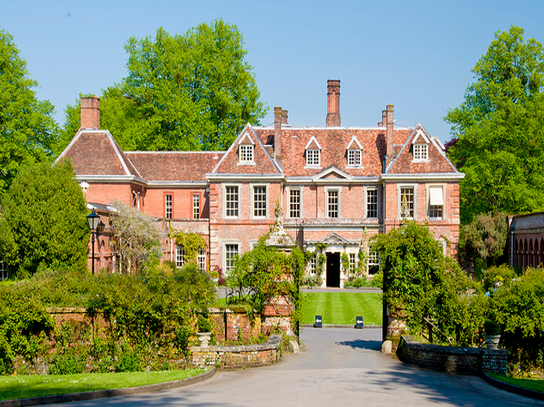 It is thought that Elizabeth already had a lover, the Duke of Hamilton, for whom she had a deep attachment but his attention appeared to Elizabeth to have cooled and he did not write. It has been suggested that her aunt at Lainston had for some reason withheld his love letters to Elizabeth and she, piqued at his rejection married the young Hervey despite her aunt’s pleading for them to delay marriage until Hervey had completed a two year tour of duty with the navy. Elizabeth would be forced from her job as Maid of Honour if she married and the couple were penniless, nevertheless, Elizabeth returned to court and Hervey went to sea, no one the wiser. 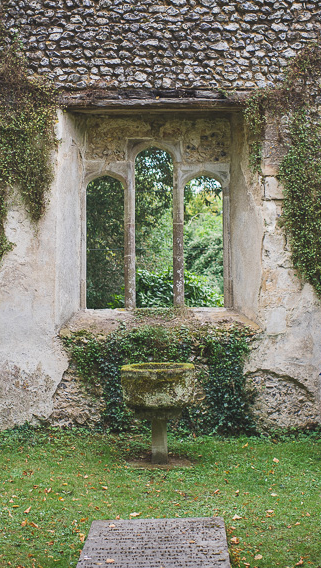 Ruins of St Peter’s church at Lainston House. Is this where they married?

As no one knew of the marriage, Elizabeth felt free to flirt as she chose but of course had to reject offers of marriage. When Hervey returned he was shocked at her behaviour but unable to do anything about it. She fell pregnant in 1747 but the baby did not survive and eventually in 1749, Elizabeth and Hervey agreed to a secret separation. Problems began to mount for Elizabeth, at the age of twenty eight she was considered quite old for marriage, she had no money and of course would be committing bigamy if she married anyway. Her behaviour as well, was considered by some to be shocking. At a masquerade ball at the King’s Theater in the Haymarket during the King George II Jubilee Celebration, she wore the costumed of Iphigenia. It was made of a nearly see through flesh coloured silk. Whilst others were askance, the king himself was infatuated and would have taken her as a lover had she acquiesced. 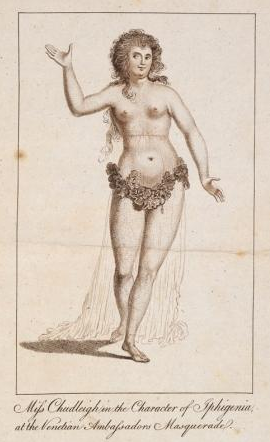 1788 . Published in ‘The Life and Memoirs of Elizabeth Chudleigh’

Elizabeth and the Duke of Kingston-Upon-Hull

Her saviour came in the form of Evelyn Pierrepont, the 2nd Duke of Kingston-upon-Hull, who fell in love with Elizabeth and she with him. They became lovers and true friends. They travelled abroad and Elizabeth seemed content and settled, however in 1759, Elizabeth did a curious thing, she had her marriage to Hervey registered and sealed in the church of St Peter’s at Lainston, now a ruin. This seems a strange thing to have done but she possibly felt the need to protect her position should the Duke abandon her.

Hervey now decided that he wanted a divorce. Elizabeth realized the Duke would never marry a divorcee and took the matter to the ecclesiastical court, stating that the marriage had never taken place. It was now incumbent on Hervey to prove that the marriage existed. Witnesses were provided but Elizabeth stood by her claim that she was unmarried and in February 1769, the consistory court pronounced her a spinster. She married her Duke on her 48th birthday and lived happily with him until he died four years later.

The Duke left Elizabeth all his property on condition she did not remarry. His family were outraged and this action would eventually come home to bite Elizabeth. The Duke’s nephew Evelyn Meadows, charged her with bigamy and she was tried as a peer in Westminster Hall.

Georgian society was consumed by the case, the aristocracy packed the court daily court and Elizabeth was torn to shreds by the public and media alike. She was put under house arrest and accused of having tricked the Duke into a bigamous marriage. That he was totally in love with her and the two were best friends as well as lovers went unnoticed. She struggled for friends and many testified against her, including the doctor who had delivered her baby son.

She managed to retain much of her fortune but with friends few and far between she lived in Europe, hoping to find solace there but she died alone in Paris in 1788, still technically married to Hervey, he never did proceed with the divorce and her death evoked even more outrage in the press. Georgian society was incredibly intolerant of bigamy but for women divorce was incredibly difficult. Elizabeth’s little fling in Hampshire was to colour her entire life. Lainston House is now a beautiful hotel brimming with Hampshire history.