Fort Cumberland, which has stood at the entrance to Langstone Harbour for over 150 years was the subject of a major bombing attack in 1940 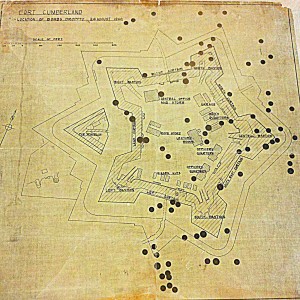 Fort Cumberland is a pentagonal fortification, situated at the South-Easternmost point of Portsea Island where it has guarded the entrance to Langstone Harbour for over 150 years. Surveyed and engineered by John Desmaretz
During WWII Portsmouth was subjected to sustained air attacks from the German Luftwaffe.
On the night of the 26th August 1940 the Luftwaffe droppped 78 bombs on Fort Cumberland, which was then being used as an overflow base for the Royal Marines.

The map shows the exact positions of where the bombs landed.

What is incredible is that although the main barracks a mile to the West were full, only one of the bombs caused a loss of life when it hit a room on the perimeter. 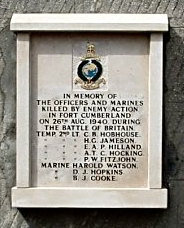 There is a memorial, erected on the exact spot where the men lost their lives.