Deadman’s Plack a memorial to Anglo Saxon tales of murder and deceit.

One of the later Saxon kings, Edgar, is remembered in Harewood Forest, close to the village of Longparish in Hampshire, by a monument called Deadman’s Plack.

The monument itself is a C19th cross was erected in 1825 by Lieutenant Colonel William Iremonger whose wish it was to commemorate an event that supposedly took place in Harewood Forest in 963 AD.

The inscription on the cross tells of a betrayal and two murders but the story that led to the erection of the cross is a much more detailed and sordid one.

Edgar a king weakened by the charms of a pretty woman

Edgar was a womaniser and many tales tell of his amorous encounters with women, including a nun, by whom he had a child. When St Dunstan heard of this affair he admonished the king and made him take a vow of repentence. Edgar alledgedly set aside his crown and fasted for several years.

Edgar had already been married twice when rumour of the Duke of Devonshire’s daughter Elfrida reached his ears. Was she as beautiful and charming as described? Edgar was keen to find out and sent his Earldorman, Ethelwold to find out and return her to court, if the rumours were true.

Ethelwold did indeed find her to be charming and promptly married her himself and settled down for a life in Devon, sending back word to the king that the woman was unattractive and therefore not to be brought before the king.

Edgar however heard that Ethelwold had married a beautiful lady and ordered them both to appear before him, a frightened Ethelwold begged his wife to appear unattractive before the king but she had other plans. Elfrida dressed finely and set out to look as alluring as possible before the king.

The king will have his revenge

Edgar’s anger at the duplicity of his earldorman resulted in the latter being drawn into Harewood Forest under the pretext of a hunting party and there Edgar murdered him with a javelin.

Elfrida must have given tacit consent to the murder of her husband as she quickly marries the king but her scheming nature does not end there. When Edgar died in AD 975 she had her step-son Edward murdered at Corfe Castle so that her own son Ethelred could become king.

She must have grown tired of her deceitful and murderous ways for she retired from the world to found the nunnery at Wherwell, where she clothed herself in hair cloth and slept upon the open ground, undertaking every kind of penance, in order to expiate her crimes.

Without the monument probably few of us would know of the stories that surrounded one of the Saxon kings.

He was the younger son of Edmund I and King of all England from AD 959. Known as King Edgar the Peaceful.  He strove to unite the English and the Danes and by a show of strength both on land and at sea, persuaded the northern kings to submit to his lordship. He made St Dunstan Archbishop of Canterbury and Dunstan became the king’s personal adviser. The reign seems to have been a peaceful and prosperous one and under him the English church was nurtured and thrived. It seems his weakness for women was the fault that drew him towards murder, if of course the tales are true? 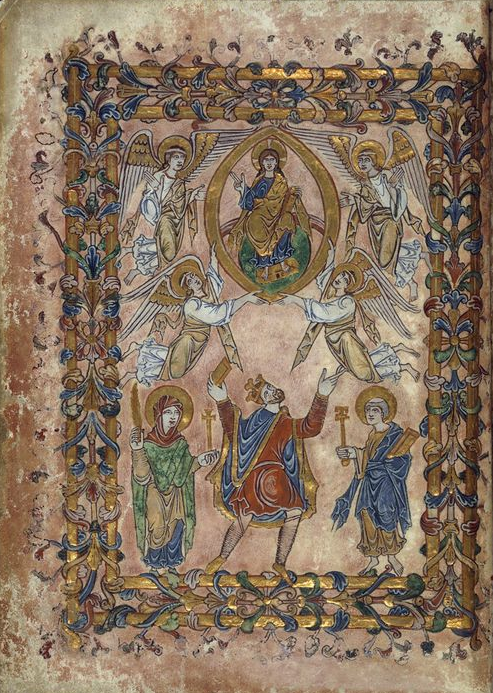