Dame Mary Donaldson, born in Wickham, was the first female Lord Mayor of the City of London in 800 years

Dame Mary Donaldson was a remarkable woman. She was born in her father’s ironmongers shop in Wickham on 29th August 1921 and baptised Dorothy Mary but was called Mary for most of her life. Her father Reginald George Warwick was an ironmonger and her mother, also called Dorothy, nee Bennett, was a local school teacher. Her father came from Wickham but her mother was from Preston in Lancashire and seemed to have been very influential in Dame Mary’s life. She was herself a politically motivated woman, becoming the first female member of her local council. Dame Mary Donaldson was taught by her parents that everything in life had to earned, it was advice that would guide her through the rest of her life. 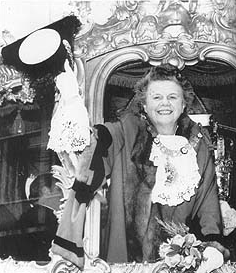 Dame Mary Donaldson was educated at Portsmouth High School for Girls and when she left in 1937 at the age of sixteen, she travelled to Paris to spend a year there, teaching English.. During 1937 Europe was in political turmoil and one wonders what effect that had on the young Mary. On her return to England she went to Oxford to train as a nurse and on qualifying went to work at the Middlesex Hospital in London. She nursed in London through WWII, staying there through the Blitz to nurse the injured and of course nursed those soldiers returning home to England.

She also nursed at Stoke Mandeville, where she cared for airmen who had suffered terrible burns.

Towards the end of the war she met John Donaldson, then a lieutenant-colonel serving with the Army, and later to become Master of the Rolls. He was visiting his mother who was being treated in Middlesex Hospital. Donaldson took Mary out on a date and in 1945 they married in Hampshire. Once married, Mary stopped nursing  and brought up her three children. She continued to involve herself in charity work, in particular work for the Red Cross. Her compassion for others remained a driving force in her and in 1960 she was appointed a JP for Inner London, serving until 1965 on the Inner London Juvenile Court Panel.

It seems as if her mother’s political streak coursed through her veins for when her children had grown up, Mary Donaldson decided that she wished to stand for election to her local authority, the Corporation of London. This was an enormous challenge to the powers that be. Incredibly no woman had been elected in 800 years. One can imagine the opposition of many in the City. She lived in the Temple area of the City and in 1966 she stood successfully for the ward of Farringdon Without, thus becoming the first woman ever, to win election to the City’s Court of Common Council.

In 1975 she became the first woman alderman and then in 1981 and 1982, went on to become the first female Sheriff of the City of London, before being elected Lord Mayor in 1983.

Dame Mary Donaldson never stopped being a nurse at heart though and continued an interest in both health and education. From 1967 to 1969 she was chairman of the Women’s National Cancer Control Campaign and she was chairman of the Interim Licensing Authority for Human In Vitro Fertilisation and Embryology from 1985 to 1991. She was president of the British Association of Cancer United Patients (Bacup) from 1985 to 1993 and governor of many schools including the City of London School for Girls.

Dame Mary Donaldson died in 2003. What a remarkable woman and inspiration to others. From a humble ironmongers shop in Wickham to first female Lord Mayor of London, what an achievement. 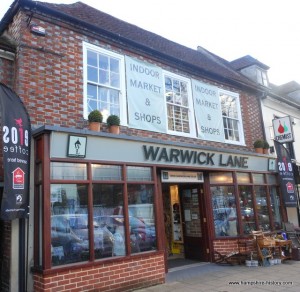 You can visit the building where Dame Mary Donaldson nee Warwick was born. It is now the Warwick Lane Shopping Centre in Wickham,with individual craft and antique shops. Sit and enjoy a coffee at the Wickham Coffee House which has the bonus of free WIFI. The coffee shop website has some great old photos of Wickham.

To find out more visit the Warwick Lane website. The centre manager, Steve Manning is hoping to get funding to have a permanent blue plaque placed on the building, commemorating the birth place of Dame Mary Donaldson, a fitting tribute to an inspirational Hampshire woman.