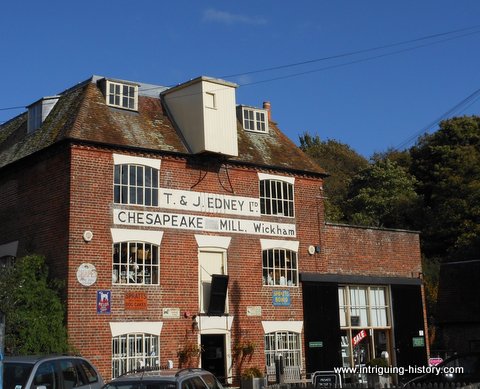 Outwardly Chesapeake Mill is a grand brick built building, standing tall and dominating the corner in which it sits. It is now an emporium of antique, brik- a- brak and craft units with a tea shop but the interior still has the feel of a working mill. Maybe it is the sound of the River Meon pouring past, intent still, on trying to do the work it was harnessed to hundreds of years ago when the first mills were built along the River Meon. The current mill was built in 1820.

It would just be another very attractive mill building, except that its owners in the early C19th, the Prior family, bought the timbers for its construction from the Royal Naval Dockyard in Portsmouth and that its shape and size were dictated by the shape and size of the timbers. It can be surmised therefore that the building has the dimensions of the ship she was built from, an incredible fact.

If the name has the ring of America about it that is because it was American ship’s timbers that the mill was constructed from.

In 1812 Britain and America were engaged in a war that was primarily about trade but also about naval dominance. The frigates involved were heavy ships with a large number of guns but the American ships were superior in many ways and Britain badly needed a resounding victory to restore confidence.

The two ships, the USS Chesapeake and the British ship HMS Shannon met in battle of Cape Ann and after a mere 12 minutes of combat, the Shannon had overwhelmed the Chesapeake and captured her.

The American frigate was eventually brought to Britain and in 1819, after getting some use out of her she was scrapped.

The following article in the Ipswich Journal of 16th October 1819 records the events:

The famed American frigate Chesapeake, a crack ship of their navy,which became the Shannon’s glorious prize, and was condemned at Plymouth. has been purchased by Messrs. Pushman anid Holmes, of Portsmouth, who are under bond to Government to break her up the next spring. She has been brought round to Portsmouth Harbour, by Capt. George Goble, of Bosham, with a crew of 19 men only, under jury-masts, in the most seamanlike manner, and is a great object of-attention among nautical men. She is unquestioniably as fine a ship as ever swam ; her timbers are remarkably stout; her upper deck is 174 1/2 feet in length andt 41 feet 6 inches in the midships ; she mounted 54 guns of heavy metal, and was the Shannon’s superior in every respect but discipline. 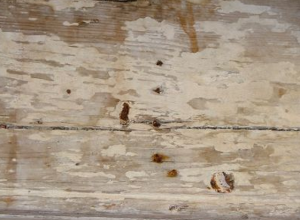 Timbers showing signs of their earlier use

Her timbers were put up for sale and Mr Priors of Wickham was the purchaser. The timbers still show all the marks of battle, shrapnel fire and supposedly bloodstains. The original timber joints have been re-worked in parts but the essence of the ship remains.

As to the mill itself, it was a corn mill in operation until 1976. It is three storeys tall with an attic atop. Originally it had five pairs of grindstones, powered by two breastshot water wheels powered by a diversion of the River Meon. Over time these were replaced by a water turbine and then a steam powered engine.

So a remarkable building, both in its construction and its industrial heritage.

Chesapeake Mill has an excellent website from which you can read more of the battle off the coast of America that resulted in the historical connection with Wickham in Hampshire.