Following the arrival of the Normans in 1066, King William I lost little time confiscating the Anglo Saxon held lands, estates and church buildings and passing them into the hands of his Norman favourites. There were many vacancies amongst the clergy and these places were filled by French clergymen who traveled with their own craftsmen. This was an opportunity to impress and the churches they set about building had bigger, wider and more decorated arches, such as can be seen in the church of St Peters in Petersfield. The Norman Romanesque style was born. Browse the table to get a snapshot of Norman churches in Hampshire and click through to the individual posts. There are examples of Norman work in many churches but this table is a pick of the best. 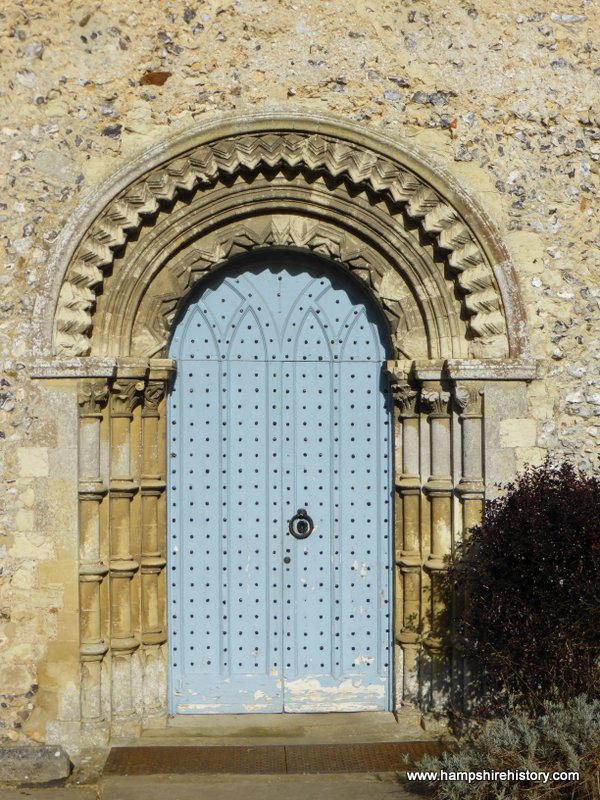 How many decorative features can be fitted on a doorway? Easton church.

Across the country these monumental churches were built, with massive walls although these were generally walls with an infill of rubble and faced with axe hewn stone and small windows, these churches were to stand the test of time. The church was built with two ‘cells’, the nave and the the smaller aspidal sanctuary. 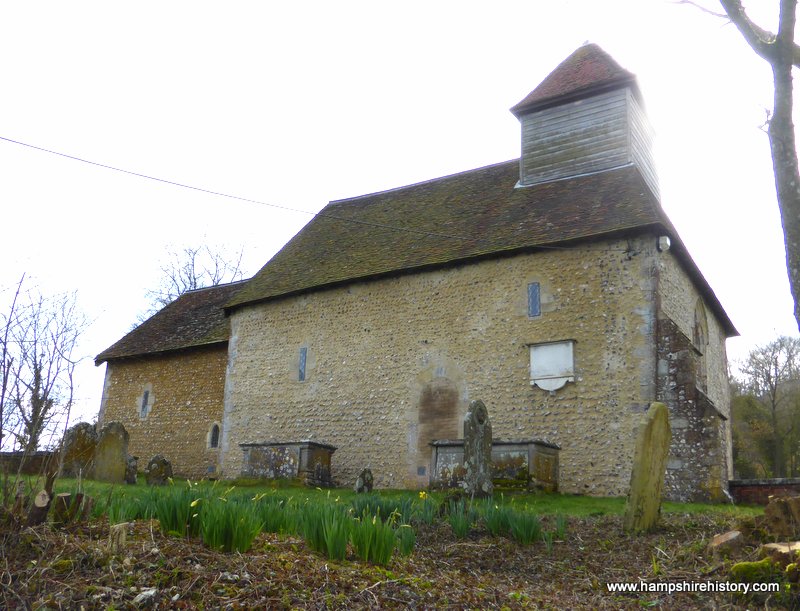 As the population increased, larger churches were needed. It became important that all the community could be accommodated within the church. Transepts were added to the north and south of the choir and so the first cruciform churches were built, a central tower was then added, an example is the church of All Saints in East Meon.

Within a hundred years there were as many as 7,000 Norman churches in England.

The Normans re-used the Anglo Saxon church, there was the question of ancient sacred places to be considered, the position of the old church, usually on dry ground close to the manor house it served and other factors such as cost to consider, so re-using a building was a sensible solution. It was not without its problems though. Anglo Saxon naves were narrow, adding transepts made the interior very gloomy and so a clerestory was added. A clerestory means a ‘clear story’ containing high windows which allowed light to flood the church.

However the Norman builders were not stupid. One of the simplest ways to enlarge a church is to construct a building parallel to the nave and then knock through. If you do that though the roof will collapse and so those great arch building masons supported the point between old and new with an arcade. An arcade is a series of columns which support massive arches which in turn support the heavy stone walls and roof.

Look above the arcade and there is a good chance of glimpsing the oldest part of what appears to be an entirely Norman church. The arcade supports the old intact Anglo Saxon wall such as can be seen in the church of St Peter and St Paul in Hambledon. 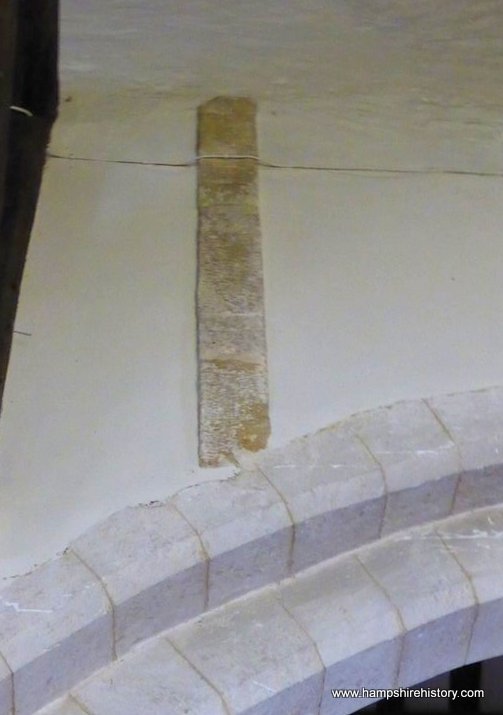 See the Anglo Saxon pilaster strip from the original wall above the later cut through arch.

Norman columns are usually round although some are octagonal. Some have been carved with vertical grooves running down their length. They stood on a square base and sometimes the mason has added decoration so that the seam between the two is not obvious. The column was topped by a square capital from which sprung the arch and here the mason added their decoration. 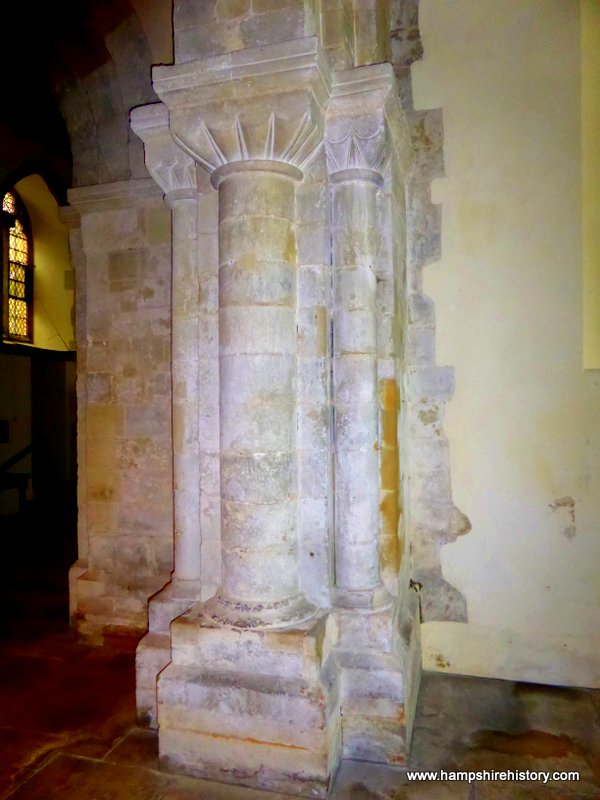 Example of a Norman column in East Meon church.

They could afford the best of the Norman masons who were teeming with ideas about style and decoration. Blind arcades appear inside and outside the church, great turrets and towers spring up and the masons own artistic flair can be seen in ever more elaborate decorations as in Romsey Abbey in Hampshire. 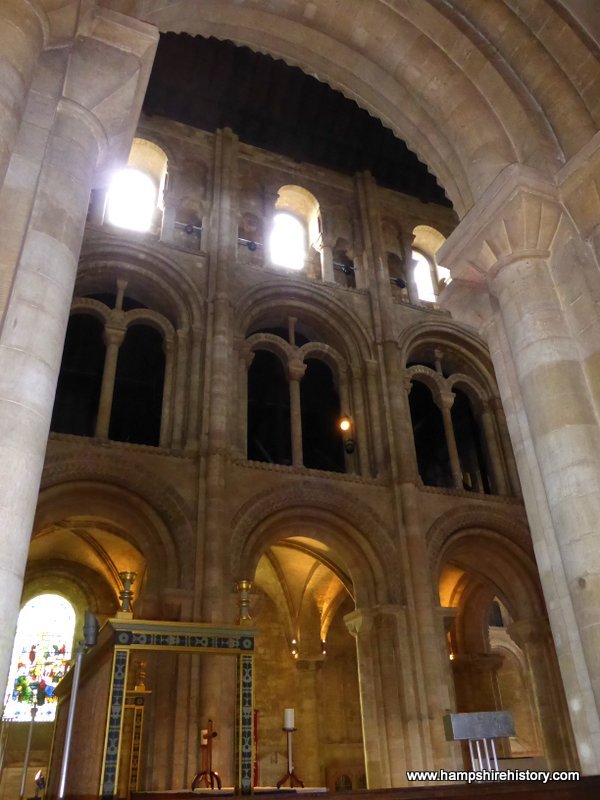 Norman churches, built by master masons, let’s let them have the last word 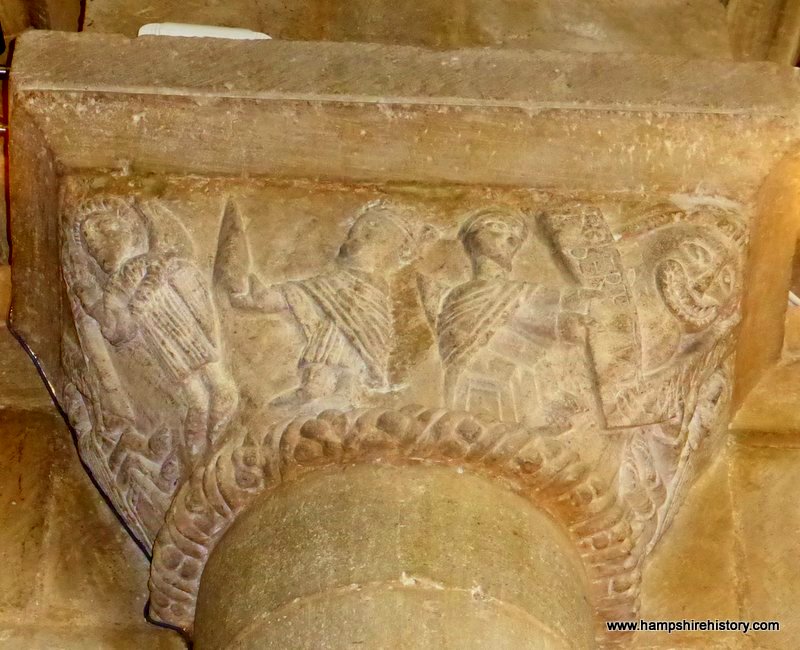 ‘Robert Made Me’ a Master Masons work