The Incredible Gospel Oak of Avington

The Gospel Oak in Hampage Wood Avington, serves as a reminder of the important role our beautiful Hampshire woodlands have served over time 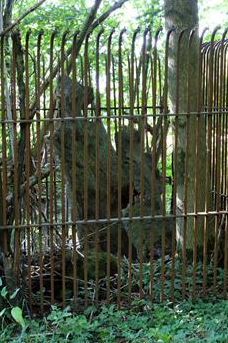 The Gospel Oak at Avington

South East of Avington is Hampage Wood. When King William Conquerored England, he took possession of the forests, they were a precious resource and his love of hunting is well known. King William appointed a distant relative of his, Walkelin, as the first Norman Bishop of Winchester. It was not long before Walkelin demolished the Old and New Minsters at Winchester and began building a completely new Cathedral, in majestic Norman style. Once the stone walls had been erected timber was needed to construct the roof. Walkelin turned to King William and asked for his help in sourcing the oak timber that would be needed.

King William considered the English woodlands as one of his most important possessions, not only was timber a valuable commodity but he had a great passion for hunting, born out in the forest laws laid down in his time. Despite this, King William granted Walkelin as much wood from the forest at Hampage Wood as his carpenters could take in four days and nights.

Walkelin must have realised that in order to extract anything like the amount of timber he would need for his cathedral, he would require an army of men and so he called upon carpenters from all over to assist with the task.

It is said that in the allotted time, he laid the forest bare but for one oak tree, carting away to Winchester, the ‘gift’ of his King. 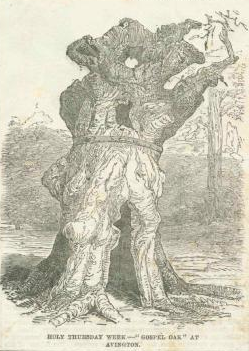 From a 1880 article. Hampshire Library

The tree he left was a Gospel Oak, a tree under which St Augustine was supposed to have preached the gospel when bringing Christianity to England in the C6th. When King William saw what had been done to his forest he was outraged and it is said that Bishop Walkelin had to beg for his forgiveness for his act of greed.

The remaining oak tree continued to be protected and sometime in the C19th iron bands were placed around it to hold it together and the whole surrounded by an iron paling fence. The wood re-grew around this venerable old tree and whatever the truth of this historic tale, this hollow ancient Gospel Oak, barely clings to life, is certainly ancient and the tale attached to it a plausible one.