The Hampshire Chronicle, the earliest newspaper to be printed and published in Hampshire

The thirst for news was as important to the man on the street in the early 18th century as it is today but the difficulties of producing a newspaper for all to read were immeasurably harder. Certainly, this was a time of rising levels of literacy but the idea of the masses of poor forking out sixpence for a newspaper was still a long way off. There were other issues too. Printing and distribution. Printing presses in the 18th century had changed little from those in medieval times. The type was still arranged by hand and feeding the paper to the presses was still a laborious process. The problems of distribution, on a poor and sometimes impassable road system was still a challenge, particularly in winter months.

An earlier attempt at a Hampshire newspaper

Between the years 1743 – 1746 ‘The Winchester Journal’ was published in Church Walk by a gentleman called D. Henry. It was sent to Reading to be printed, suggesting that there was no printer in Winchester at this time. It must have been a struggle to run the business and it lasted a mere three years.

John Linden, a commercial printer took up the challenge

John Linden was a Southampton business man, a commercial printer, producing posters and handbills for local trades. He also ran an employment agency for local domestic servants and ran a register of lodgings to be found in the Southampton area. With these disparate yet connected businesses, Linden probably thought, that by producing a newspaper and running adverts, he could enhance all his business propositions. 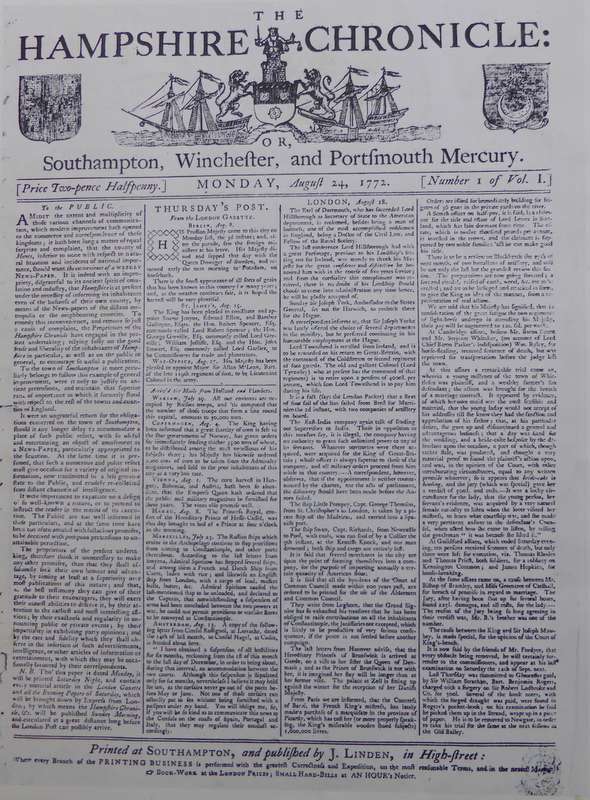 He must also have wanted to disseminate knowledge. 1772, a time when Britain was in the midst of its tussle with America and money was pouring out of the treasury to support the war. Parliament needed to raise huge sums of money to support the war effort and was taxing the population of Britain heavily. Linden faced a tax on the paper he was printing on, stamp duty on each paper produced and on every advert placed. To make it work, John Linden needed to sell an awful lot of newspapers. His was an uphill battle but he spoke so eloquently when faced with yet another increase in tax.

‘…a newspaper is an article of necessity rather than luxury… the political affairs of this kingdom are now rising to an important crisis and every mind is anxious fro some grand event in the present struggle between Great Britain and her colonies….’

On behalf of the Hampshire Chronicle, he ended his plea to to the politicians intent on taxing him out of business;

‘Must we be forbidden to interfere with science, art or literature and be compelled to shut the gates of knowledge on mankind?’

The problems for Linden continued to mount and it was necessary for him to form partnerships with others, Messers Webber, Wise and Hodson all joined Linden in his enterprise. By 1776 though, with the ‘important crisis’ Linden spoke of, erupting in the form of American independence, Lindens partners deserted him and within two years, John Linden was bankrupt.

T. Baker & Co briefly took over the paper for two editions. On June 1st 1778, the whole business had been transferred to Winchester and the Hampshire Chronicle was being printed and published by J.Wilkes, High Street Winchester. He ran the paper successfully for five years, then handed over to Thomas Blagdon and the title changed to ‘The Salisbury and Winchester Journal and Hampshire Chronicle. Taxes continued to be a problem and Blagdon had to hand the paper back to Mr Wilkes.

Such was the political state at the turn of the 19th century, the war with France now adding immensely to the tax burden of the country, that it is little short of a miracle, that the Hampshire Chronicle managed to survive this period and yet there was an ever greater need for the public to be kept informed of events. The people of Hampshire lived with the very real fear of a French invasion. By now Joseph Bucknell was running the paper. He wrote to his readership.

The bulk of the content was local but how was it gathered? Messengers brought news out of the larger towns, Portsmouth with its military and naval connections, could be relied upon for news from France. Court reports supplied their fair share of ‘sensational’ stories. There were also ‘writers’ who added their own flourishes of opinion to the news of the day. 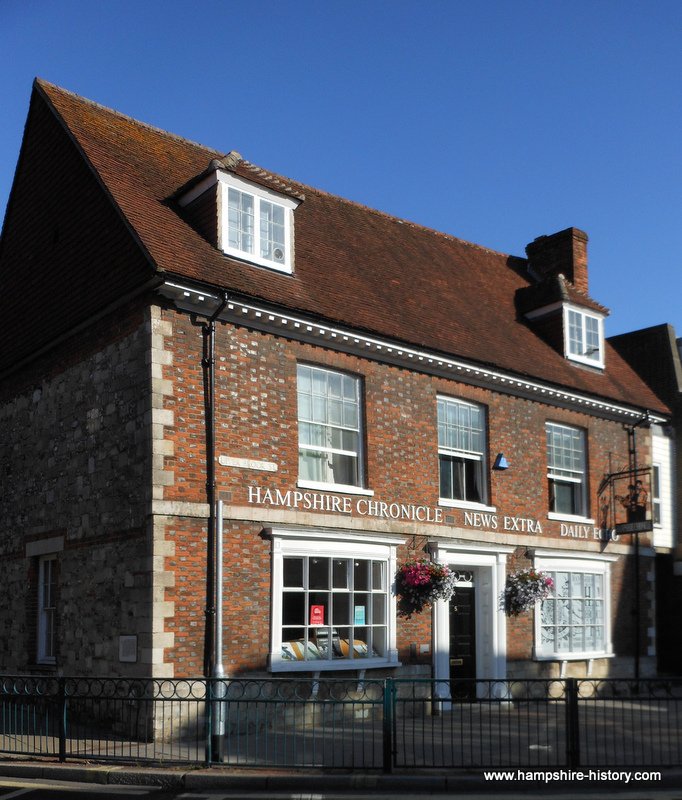 Premises of the Hampshire Chronicle Winchester

The Hampshire Chronicle in the 19th Century

The paper continued being switched from one printer to another. From Mr Long to Mr Robbins and then to the Jacob family, who, marrying into the Johnson family, then became the family who brought the Hampshire Chronicle to its present site of 57 High Street Winchester. These two families used their business acumen to turn the newspaper into an successful enterprise. They employed newsmen in the towns and villages of Hampshire to glean the tastiest news items. This increased circulation and advertising. The French crisis continued to dominate ordinary peoples lives and they wanted to know what was going on. 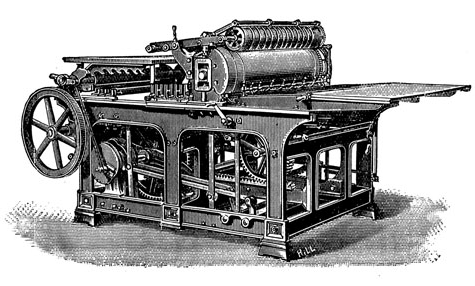 The Hampshire Chronicle was being printed in Winchester and in the home town of the Johnson family, Gosport. Eventually in 1820, the two families formed a partnership and Jacob and Johnson became the successful proprietors of the Hampshire Chronicle. New presses were installed and they were soon printing books and newspapers. They benefited from the victory over the French, at the Battle of Waterloo and weathered their way through the 1820’s until the Great Reform Act of 1832, when it was recognized that changes in taxation and many other areas was desperately needed. Jacob and Johnson were able to reduce the cost of a newspaper, increase advertising and circulation.

The paper reported on the major events, the death of  King William, the coronation of Queen Victoria and the Crimean War.

Generations of the Jacob and Johnson families continued the paper

At the end of the 19th century, a new factory was built to print the paper. They installed two Wharfedale presses and powered them using a gas beam engine. They were families who had insight and it is to them that the papers continuation into the 20th century must be credited. Inevitably the newspaper changed hands over the following years but it remained a local newspaper, absorbing other local newspapers as time went on. The property in Winchester is a familiar sight to anyone. A Georgian feast of bow windows and fluted doorposts. But it is to John Linden, having the tenacity to hang on to what he knew to be good and right, that we should thank for the Hampshire Chronicle still existing today.