Desmaretz Map Portsmouth 1744 is a brilliant view of the heavily fortified town of Portsmouth.

John Peter Desmaretz had a sixty year career, mapping and fortifying most of the south east coast of England. He was surveyor, engineer and architect all rolled into one and his output was prodigious.
He spent a large part of his career working in Portsmouth dockyard where he drew up numerous plans for the dockyard, town and defences.
This map of 1744 gives an excellent idea of the scale of fortifications for Portsmouth. 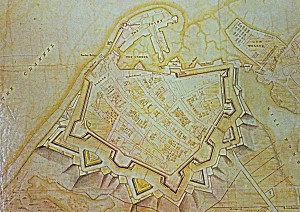 Note the Gun Wharf, separate from the fortified town itself. The Victuallers Quay for supplies to be brought in and the staple diet of many a poor family living on the coast oysters, represented by Oyster Street.
Desmaretz himself was buried in the Garrison Church where his epitaph gives a glimpse of his possible origins, it has been suggested that he may have been a Hugenot.

‘though born a foreigner, he early adopted every sentiment of civil and religious liberty and exerted his active abilities for the service of this nation in quality of an engineer’

Posted in Portsmouth, Maps and Mapping Resources, Architecture and Artefacts, Documents and Maps, Castles and Palaces and fortifications