The mill is situated towards the head of Southampton water, where Bartley Water, having made its way through the New Forest, finally exits into the River Test and Southampton Water.

Eling tide mill harnesses the power of the tides to generate power to turn a water wheel that sets the grinding stones into operation to produce flour. The mill is a very rare thing because although mills that harness the power of tidal waters were once an important part of generating power in England, America and other parts of Europe, few if any survive. 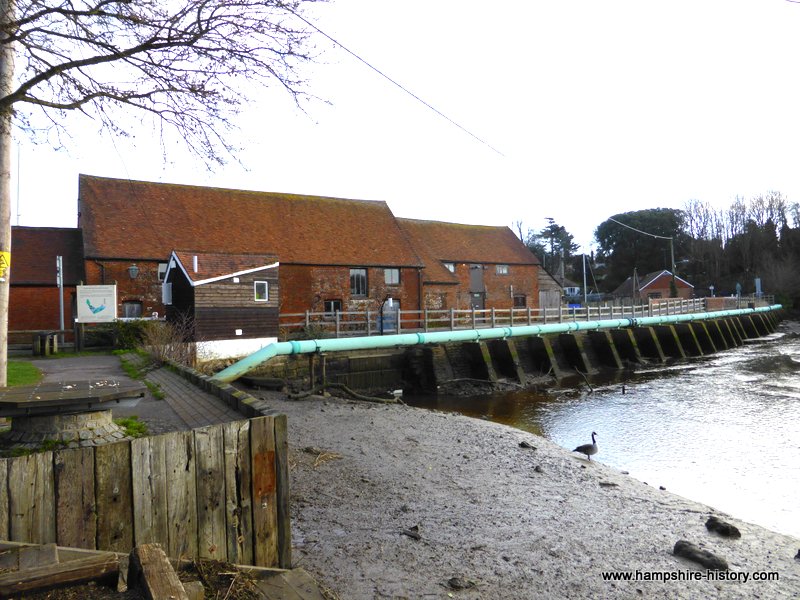 There has been a mill on the site of the present mill since at least as long ago as Domesday. The building that stands at the moment originates from the 1780’s when it and the dam that it sits on were damaged in storms. Mills were valuable and variable, they provided not just a source of basic commodities such as flour but also a valuable income.

In 1382, Eling Tide Mill was gifted to Winchester College, in whose ownership it remained until 1975. Grain was brought up to the mill in barges from the east coast of England and this little mill, capable of running up to ten hours a day could produce several tons of flour a day.

So how does it work?

A dam has been built across the tidal Bartley Water and the mill sits on its seaward side. As the tide comes in it forces its way through gates in the dam wall and fills what is, effectively, a giant mill pond. When the tide turns and the water level on the seaward side has fallen, exposing the water wheel, the water from the mill pond is released through the gates. It generates about five hours worth of power and it does this twice a day because Southampton Water has two tides a day.

Eling tide mill and toll house on the right

Eling Quay with its mill and dam is a piece of living history. Out in Southampton Water the docks with their massive container ships give a nod towards the past when these shores were brimful of associated industries. There is a heritage centre in what was the site of an old steam mill, the toll bridge that sits atop the dam continues with the right to charge tolls that stretches back as far as the C14th. The church is claimed to be the tenth oldest in the country and the Anchor Inn, five hundred years old.

There is an excellent explanation of the detail of the running of the mill in the booklet about Eling Tide Mill, which can be bought from the shop. The heritage centre has a study room with local resources and it is easy to spend a day exploring the history of this fascinating little pocket of Hampshire history.