A chance find in a charity shop today turned up a racing chart of Solent and Spithead, how appropriate on the first day of the ‘America’s Cup’ hosted in Portsmouth for the first time in 164 years.

Not being a sailor the chart is full of mysteries for me.

The racing chart marks out areas of military activities. Off Stokes Bay is the torpedo firing area and then moving from Stokes Bay towards Lee are warnings of rifle firing when the red flags are up. From Lee to Hill Head is a submarine exercise area and then further up Southampton Water, is an aircraft flarepath area, whatever that is!

What caught my eye where the names of the deep water channel markers running into Southampton Water. West Bramble, Thorn Knoll, North Thorn, Black Jack, what a strange lot of names and how were they derived? 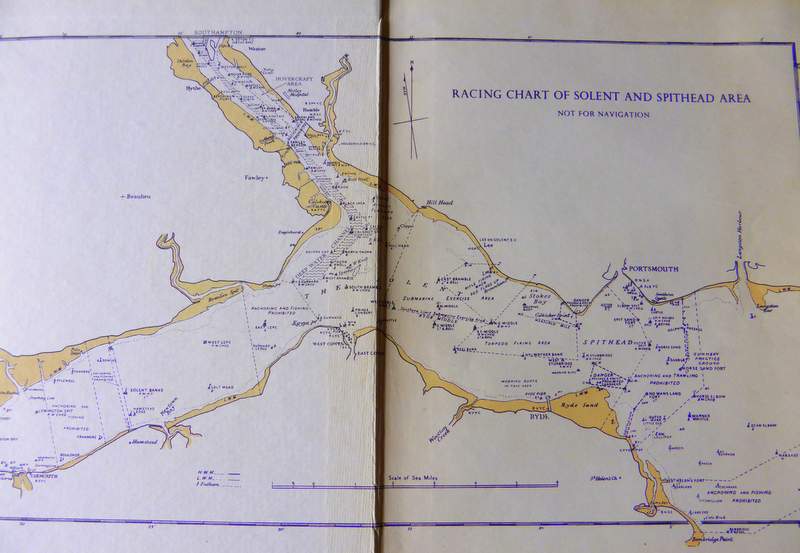 In 1851 a schooner named America sailed past the Royal Yacht anchored in the Solent with Queen Victoria on board. She was taking part in a sailing race between the Isle of Wight and Portsmouth.

The schooner dipped its ensign three times, it had won the race. It was representing the New York Yacht Club and won the the Royal Yacht Squadron’s 100 Pound Cup and so began the America’s Cup. America continued to dominate but the cup is named after the schooner, not the country.

So the defender of the cup meets the challenger and the race begins for the chance to hold aloft, ‘Auld Mug’ as the trophy is affectionately called. It is the oldest sporting trophy in the world.